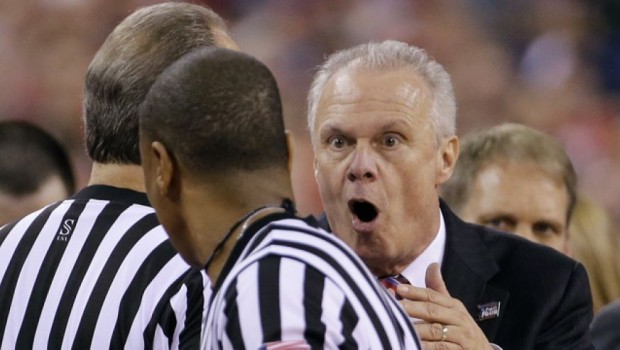 DID ZEBRAS HOLD THE KEY TO DUKE’S VICTORY OVER WISCONSIN?

Wisconsin coach Bo Ryan was mightily pissed off over the blown call that helped Duke wrap it up.

Instant replay in this NCAA tournament seems to have gotten more wrong than right. In this case, it was a contended out-of-bounds call that had actually gone off the fingertips of Justise Winslow, not a Wisconsin player as had originally been called.

Two minutes, probably dozens of views of multiple angles of replays and three highly trained officials, deemed good enough to be reffing in the biggest game of the year, disagreed with all three CBS analysts, all of Twitter and every American watching. Even a non-delusional Duke fan had to know this ball was out on Winslow.

But, alas, the three men who needed to know didn’t. Duke retained the ball up 63-58, hit a three pointer on its next possession, went up 66-58 and basically clinched the game with 1:24 remaining. It was an ugly game with a fun back-and-forth pace, but it didn’t deserve to be decided by officials who couldn’t tell what was plainly obvious.

It’s too bad too, because now anti-Dukies will bring up this play and say Duke should have lost. But, realistically, there was probably an 80% chance Duke was winning even if Wisconsin got the ball. With the way Jahlil Okafor and Grayson Allen were playing and how Coach K was coaching down the stretch, it was hard to see Wisconsin overcoming that.

The officiating was the only disappointing thing about a classic 2015 NCAA tournament. Every game has bad calls, but over the past three weeks, so many of those bad calls came near the end. Would the tournament have turned out differently if competence had been dressed in black and white?