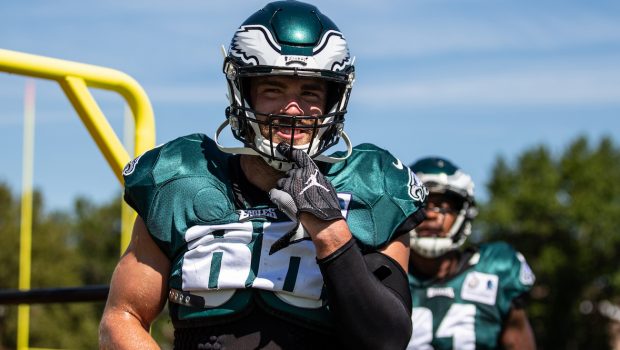 ERTZ NO. 3 FANTASY TE: WHY ARE EAGLES SQUEEZING HIM ON BUCKS?

Eagles tight end Zach Ertz says he wants to remain in Philly for the rest of his career but doesn’t “know for sure whether the feeling is mutual.”

The Eagles and Ertz’s representatives have twice engaged in extension talks but have come up empty.

Kittle inked a five-year, $75 million deal with the San Francisco 49ers; Kelce agreed to a four-year, $57 million extension with the Kansas City Chiefs. Ertz has two years remaining on his current deal, which pays him $8.5 million on average.

“I don’t want to get into the exact details, but I don’t think it should be that hard to get a deal done now,” Ertz said.

“At the same time, now that the season is starting, I can’t really focus on that. During training camp, it kind of got the best of me a day or two, and I really just had to talk to a couple people and reset my mind and lean into my faith that I really can’t control the situation and I’m going to trust in the Lord on this thing whether it’s going to Philly — hopefully, I want to be here — or wherever it is.

“I’m just going to do whatever I can to help the team, and I could not be more excited going into this year. I’ve never felt better going into a football season.”

Ertz, 29, is a little more than a year younger than Kelce and 3 years older than Kittle. He has more catches through the first seven seasons of his career (525) than any other tight end in NFL history and is the only tight end in the league who has led his team in both catches and receiving yards in each of the past four seasons. Ertz, who caught the winning touchdown in Super Bowl LII, needs 66 receptions to pass Hall of Famer Harold Carmichael for the most in franchise history. Among all receivers over the past three seasons, Ertz ranks sixth in catches (278), ninth in receiving touchdowns (22) and 14th in receiving yards (2,903).

Another wrinkle in the situation is the presence of tight end Dallas Goedert, the former second-round pick whom the Eagles are high on. His rookie contract also runs through 2021.

Ertz has said he believes he’s in the same tier as Kelce and Kittle. Under his current deal, his compensation is not in their ballpark.

“I want to be here,” Ertz said. “We have roots here now. This is home. I will never think about playing in another jersey until that time were to come.”

9 Dallas Goedert Phi. at Was.