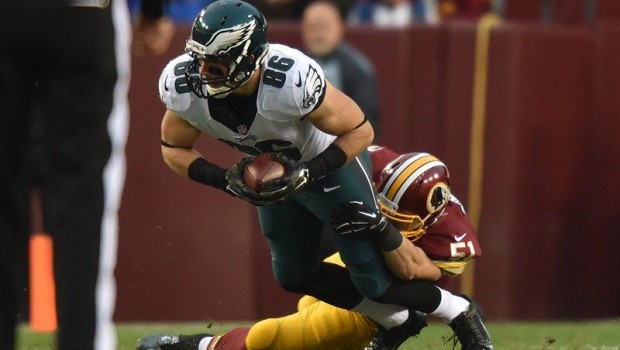 ERTZ HAD 15 CATCHES AND EAGLES DIDN’T THROW TO HIM ENOUGH!

It hasn’t exactly been a December to Remember for the Eagles or their millions of followers.

In fact, most Birds fans would have preferred the season to have ended on Thanksgiving, which was the team’s last moment in the sun, a 33-10 thrashing of the Cowboys.

The 2014 Eagles season is a nice reminder how quickly the NFL pendulum can swing. Walking off the field on Thanksgiving after embarrassing the Cowboys in Dallas on national TV, Philly looked locked for the postseason. Three weeks later they’re clinging to a thread of hope after a mistake-filled effort in a 27-24 loss to the Redskins.

The final few minutes of their Saturday night game are a microcosm for that theory too. Philly was driving down the field with Zach Ertz, whom the Redskins never covered so Mark Sanchez threw to him often enough for 15 catches.

Then Sanchez reverted to the form he perfected on the Jets.

That pick wasn’t some pathetic back-breaker of a turnover (i.e. he didn’t run face-first into someone’s butt and cough the ball up) but this was a really bad time for an interception. Add in Sanchez’ fumble and he’s got 13 turnovers since Week 9, the most in the NFL.

Turnovers have long been part of Sanchez’ modus operandi so nothing new here. But it flipped the script on an otherwise pretty outstanding game for the former first-round pick. He went from posting a career-high total for yardage in a game (374) and developing a serious rapport with Ertz to suddenly coughing up the game up.

It’s part of why Nick Foles returning was never really out of play if he got healthy (and part of why people will trade for Jay Cutler; Sanchez is likely the top free-agent quarterback this offseason). Kelly’s offense can make an average quarterback look like star. At times Sanchez has looked really good.

The last three weeks, though, he’s been decidedly average. It’s correlated with the Eagles record (0-3) and it’s probably going to mean Philly misses the postseason.

It was a brutal loss for the Eagles. Good for the Skins for coming out with passion in what was looking like a lost season. But Philly knew the stakes and couldn’t come through when it mattered.

The Lions clinch a playoff spot meaning the Cardinals and Lions are the first two teams locked for the NFC in what has to be ever.

The Cowboys (home against the Colts), Seahawks (at the Cardinals) and Packers (at theBuccaneers) can wrap up Philly’s season on Sunday, as each of the NFC contenders now faces a win-and-you’re-in scenario this week. All three teams are favored and while the football gods often like to give us Tony Romo, Jason Garrett and a butt-puckering Week 17 scenario, it’s entirely plausible the Eagles are eliminated by the time they wake up on Monday morning.

An absolute whirlwind three weeks that likely saw them spiral out of the postseason.

Chip Kelly’s a smart, cutting-edge type guy. He embraces aggressive coaching techniques, but failed to do so on Saturday. After Sanchez’ interception, the Redskins got the ball back with 1:31 left. After a 23-yard completion and a roughing the passer penalty on Vinny Curry, the Redskins were set up extremely close to the goal line.

After a Connor Barwin offsides penalty the next play was followed up by a 7-yard run forAlfred Morris, they were even closer. Like ‘let ‘em score’ close: Washington had a 1st and 8 on the 8-yard line with 1:09 left and Kelly elected to actually play defense even though he was down a timeout. The Redskins predictably ran the ball three times, melted the clock and kicked a field goal.

Philly got one more attempt at a Hail Mary but only because Washington literally screwed [up] the pooch. As Cam Newton always notes, hindsight is 50/50, but it was pretty clear at the time Kelly should’ve let the Redskins score and gotten a shot to use his offense to keep hope alive.

No one’s ever doubted Robert Griffin III’s ability to throw a deep ball. One throw on Saturday stood out in particular for looking like a vintage RG3 throw. For whatever reason the Eagles put Bradley Fletcher on an island against DeSean Jackson. Griffin wisely recognized it and put the ball up deep.

This wasn’t a *perfect* throw — Jackson ended up having to make a really nice adjustment outside on it — but it was pretty darn good by Griffin to push the rock down the field. It looked like he — gasp! — went through some progressions too.

Added bonus: it set up the next play, a beautiful, one-cut, 28-yard touchdown run by Alfred Morris.

For whatever reason the Eagles decided to leave Fletcher on Jackson later in the game too. The Redskins wisely took advantage.

One shocking, short (34 yards) Cody Parkey missed field goal later and Washington’s defense somehow managed to get off the field without any damage being done.

It was just Parkey’s third miss of the entire season (second in the 30-39 yard range) and a massive break for the Redskins.

Parkey missed another kick too, meaning the Redskins winning by 3 is kind of a big deal, huh?

All year long we waited for the Zach Ertz breakout game. It finally happened but it doesn’t help anyone who owned him in fantasy (the sub head was actually my team name this year, sigh) unless you were stubborn enough to hold onto him into the finals.

It was comical how the Eagles were feeding him at one point and totally getting away with it. It wasn’t until they finally stopped going at him that the Redskins picked the ball off and won.