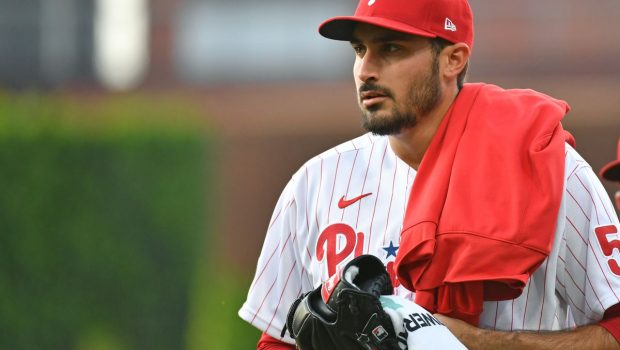 Phils starter got all boo-hooing yesterday.

And you can’t blame him.

His spring debut against the Tigers brought out his emotion.

“I honestly don’t have any words,” Eflin said after facing the minimum over two scoreless innings.

“I was tearing up in there just thinking of everything I’ve gone through, and everything last year.”

Last July he allowed six runs (five earned) over 3 2/3 innings against the Marlins. He was scratched from his next start due to what was initially called tendinitis in his right knee. The initial hope was that he would miss only one turn through the rotation.

Eflin then tested positive for COVID-19, meaning he could not see team physicians or athletic trainers until he cleared protocols. Once he did that, further examinations concluded that he needed season-ending surgery to repair the patellar tendon in his right knee.

“He’s been through a lot, with the knee surgeries he’s had,” manager Joe Girardi said. “He worked his tail end off to get to this point. We were a little bit surprised with where he was at when he got here. Really pleased. I think it’s going to pay dividends.”

“It absolutely sucked,” said Eflin, who could not have contact with team personnel during the lockout.

“So to be able to be ahead of schedule and come to Spring Training — after not being able to talk to the team or to the physical therapist that was doing my rehab for the first month or two of the offseason — I’m just really happy with the way that I feel and being able to come out here and pitch and be ready for the opening week. I think it really is a testament to how seriously I took it this offseason. I feel good and I feel like I’m in a really good spot.”

Eflin’s knee was tested almost immediately yesterday when Tigers leadoff hitter Akil Baddoo chopped a grounder to first baseman Rhys Hoskins. Eflin burst off the mound and raced to cover first in time for the out.

“I was talking to Joe Rauch, our [assistant athletic trainer], and right before the game we were just like, ‘How many times am I gonna have to get over to first base today?'” Eflin said. “And then, first batter of the game. … It was hilarious.”

Eflin then struck out Robbie Grossman on a well-executed breaking ball. His only baserunner came on a second-inning walk to Miguel Cabrera, but Eflin promptly erased him by forcing Jonathan Schoop to ground into a double play.

Eflin, who turns 28 on Opening Day, still has some work to do to ramp up for his first turn through the rotation, which is expected to come in the Phillies’ third game of the season on April 10 against the A’s. Still, he’s thrilled to even have a chance to start the season on time — especially going into the final year of his contract.

“It’s been a long road, and I really wanted to make sure if it’s my last year with the Phillies, I wanted to make every single start with these guys,” Eflin said. “I want to be pitching in the playoffs, I want to go as far as we’re gonna go. I’m just really happy with everything so far.”