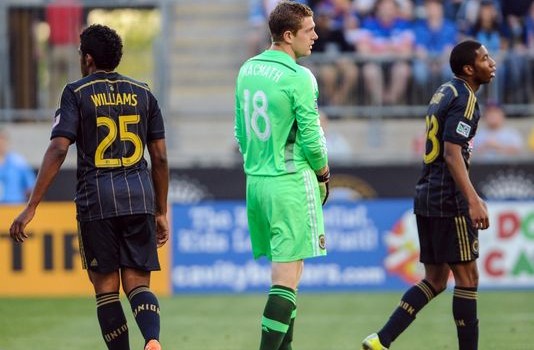 The Union found their mojo last week in Kansas City, but they weren’t ready for what faced them Saturday at PPL Park when the Revolution (the hottest team in MLS with a 6-3 record and 20 points) swamped them 5-3.

Philly (2-6-5, 11 points) was lucky to get out of the first half only down 2-1, but the Revs quickly fixed that. Lee Nguyen, who played his part in the first two New England goals, finally got one of his own when he shook Union defender Ray Gaddis in the box and pushed a goal past Zac MacMath on the near post to make it 3-1 in the 49th. Chris Tierney added the fourth on a free kick after an Austin Berry foul at the top of the penalty area in the 57th, and Patrick Mullins put in the fifth 10 minutes later to put the game entirely out of reach.

Sheanon Williams eventually added a second Union goal in the 76th, though it was much too late. Even the Sons of Ben had given up, starting a sarcastic chant of “four more goals.” A penalty kick in added time buried by Sébastien Le Toux made the score look much more respectable than it actually was.

The Union came inches away from an early lead in the fourth minute. A cross from Williams found the head of Andrew Wenger, who flicked a header on goal toward Revolution backup keeper Brad Knighton. But in his first start since facing the Union with Vancouver in late July, Knighton came up with what could be the save of the week, pushing the header wide with his fingertips.

It didn’t take New England long to capitalize on the new life afforded to them by Knighton, as Tierney found the head of A.J. Soares on a free kick in the 13th minute. New England kept the pressure up and found another hole in the Philly defense 13 minutes later as Diego Fagundez pushed by Gaddis to free himself up for an easy goal.

Philadelphia eventually responded in the 36th when Vincent Nogueira buried a rocket from the top of the penalty area. Williams sent in one of his long throws that was headed away from the New England goal. Danny Cruz got a foot on it, however, and directed it toward the French midfielder who finished his second goal of the season in impressive style.

Highlight-reel goals don’t mean much when the outcome is as ugly as this, though. After three games in eight days, the Union only have three points to show for it. Fatigue was surely a factor, though it won’t be what the players fall back on to excuse the effort.

“Our bodies are tired, that’s the reality,” Cruz said. “It’s not an excuse.”