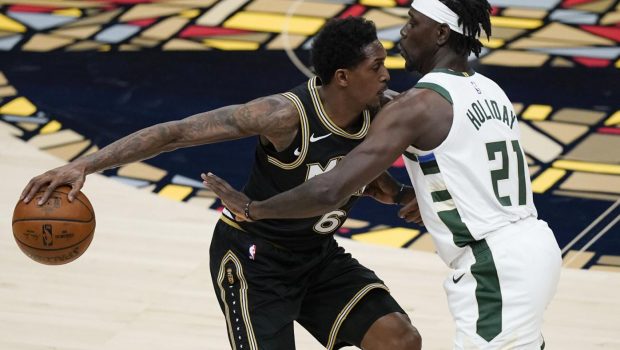 EX-SIXER LOU WILLIAMS COMES UP SWEET FOR THE HAWKS!

Trae Young and Giannis Antetokounmpo were lost to injuries in game 4 of the Eastern Conference finals — Young before tipoff with the deep bone bruise he suffered in his right foot in Game 3, and Antetokounmpo hyperextended his left knee in the third quarter.

So it was left to former Sixer Lou Williams to lead the Hawks to a 110-88 win that tied their East finals series.

Former-Sixer Jrue Holiday’s 19 points led the Bucks, and Khris Middleton added 16 points. Both shot 6 for 17 from the floor. Antetokounmpo scored 14 points in 24 minutes before exiting. No other Bucks player reached double digits. Milwaukee shot an abysmal 39% from the field as a team and 21% from 3-point range on 39 attempts.

Game 5 is scheduled for Thursday at 8:30 p.m. ET on TNT. Young is reportedly hopeful rehab can heal him enough for a return, and there was no immediate update on Antetokounmpo’s potential availability.

“He was in the locker room with the guys and just addressed the group, but nothing above and beyond,” Bucks coach Mike Budenholzer told reporters of Antetokounmpo’s status. “We’ll see how he is tomorrow.”

Atlanta coach Nate McMillan ruled Young a game-time decision for Game 5 in the aftermath of victory.

The Hawks rode the confidence of Williams and the ball movement of their remaining playmakers to a 15-5 start to Game 4. The Bucks tied the game, 19-19, and it looked like their talent advantage would turn the tide with Young sidelined, De’Andre Hunter done for the season and Bogdanovic still battling an injury.

Except, Atlanta was relentless, and Milwaukee failed to match the home team’s effort in the opening half. After averaging 62.7 points in the paint in the first three games of the series, the Bucks had just 14 through two quarters, attempting 23 of their 42 first-half field goals from 3-point distance (and missing 18 of them).

The State Farm Arena crowd had a profound impact in the early going, loudly backing their star-less squad and counting the seconds of Antetokounmpo’s prolonged free-throw routine to incredible effectiveness. The two-time MVP missed all three of his first-half foul shots and airballed two of them to the fans’ delight.

The Hawks registered assists on 10 of their first 15 field goals, and Williams recorded a game-high 13 points before halftime to stake his hometown team to a haymaker of a 51-38 advantage at the break.

“We’ve had this situation where we’ve had a lot of guys out, and our guys continue to step up, next man up, and play solid basketball,” said McMillan, whose team suffered a host of regular-season injuries. “Lou did an excellent job for us tonight, just running the team, establishing the tempo. We got great ball movement. All the things we talked about, we needed, we got that tonight, and it started with our guards.”

Antetokounmpo emerged from intermission determined to lift Milwaukee, scoring eight points in the first 4:22 of the second half to cut the deficit to single digits. Moments later, he landed awkwardly on his left knee on an attempt to block an alley-oop to Atlanta center Clint Capela. Antetokounmpo crumpled to the floor, clutching his left knee. His brother and teammate, Thanasis, helped him to the locker room. The Bucks star briefly returned to the bench minutes later, only to retreat into the tunnel for further medical attention.

Meanwhile, the Hawks forged a 15-2 run to extend their lead to 77-54 in the minutes after Antetokounmpo went down. Atlanta pushed its lead to 25, shooting 62% as a team in the third quarter (7 for 11 from deep).

Holiday led an early fourth-quarter charge to trim Milwaukee’s shortfall to 89-73, but the wave that was an Atlanta team determined to tie the series without their young superstar washed over the Bucks. Capela even made a prayer from behind the backboard as the shot clock expired to return the lead to 20 points.