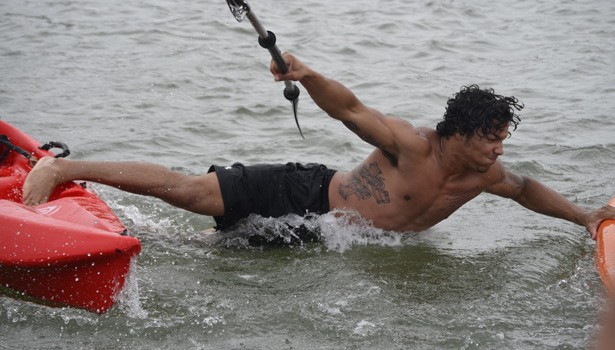 Tyrell Goulbourne, a third-round pick (No. 72) at the 2013 draft, wore a GoPro camera during the race, so he felt some extra pressure to do well. “We didn’t want to lose on camera, that’s for sure,” he said.

Not many people associate NHL hockey players with the beach — I mean, there is no such thing as “beach hockey!”

But Flyers prospects attending development camp this week hit the beach or the annual “Trial on the Isle” in Stone Harbor.

Their day started with an arm-in-arm walk into the ocean followed by teams of three competing in a race on the beach that featured a few interesting elements. After a Flyers trivia contest and a 16-block run, there were games of horseshoes and paddleball, a kite-building exercise and some physical activity in the sand. After running back to where they started, the prospects had to build a sand sculpture of the Flyers logo.

It was the first time in many years that Scott Laughton, the 20th pick at the 2012 NHL Draft, played in the sand at the beach.

“Maybe I was 4 or 5,” he said. “I was usually the guy getting buried in the sand. My brother would always bury me in the sand, and I’d be stuck. Never really built anything like this, so this is cool.”

The players next went to the Stone Harbor Yacht Club, where their creativity and ingenuity were put to the test. They were given four inner tubes, a blow-up raft, a length of rope, two kid-sized sand shovels and a roll of duct tape, then were told they had 15 minutes to construct a raft that could get them around the bay. The only rule they were given was that they had to use every item.

The team of defenseman Robert Hagg and forwards Cole Bardreau and Tyrell Goulbourne were the first in the water. They tied and taped the tubes together, taped the deflated raft to one of the tubes and paddled with the shovels; they won the race with ease.

Jim McCrossin, Flyers director of sports medicine, said there is a correlation between the day’s activities and hockey.

After lunch at the yacht club, five of the Flyers’ top prospects, Laughton and defensemen Hagg, Ivan Provorov, Travis Sanheim and Samuel Morin led a hockey clinic for area kids at Stone Harbor Elementary School, and then all 32 players went inside and signed autographs.

Among the pictures, cards and shirts that were signed, there also were the same inner tubes they had used at the yacht club. The players signed every tube, each of which sold for $20 each.

Travis Konecny, the 24th pick at the 2015 draft, has put his autograph on lots of items. But an inner tube?

The day ended with a beach volleyball tournament featuring teams of two prospects and teams of fans who paid to play.

All money raised from the activities Wednesday is earmarked for military charities, in particular the United States Coast Guard Training Center in Cape May, N.J.

Stone Harbor Mayor Suzanne Walters was happy to welcome the prospects and fans on the beach before the volleyball tournament.

“We think it’s fantastic,” she said. “It’s so great to see all the orange in town today. … It’s great. It really brings people down; they love the Flyers, and it’s a great day for everybody.”

The players enjoy it just as much. So much of their life is spent on the ice or in the gym that any break is welcomed, especially one that lets them have a bit of fun.

“It’s a nice day away from the rink,” said goaltender Anthony Stolarz, a second-round pick (No. 45) in 2012. “Mingle with the guys, interact with fans. Nice to get out and have some fun and get your mind away from the rink.”