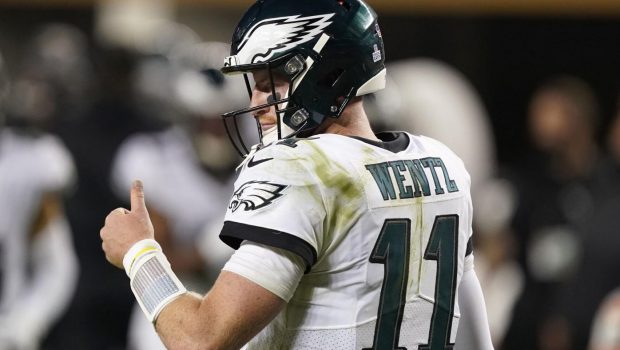 YOU’D BE A FOOL NOT TO JUMP ON EAGLES WENTZ IN FANTASY TONIGHT!

The Eagles Carson Wentz is a great example of adjusting to bad situations.

After a slow start when Wentz combined for just 27 Fantasy points in his first two games against Washington and the Rams — he had four interceptions, eight sacks and a lost fumble over that stretch — Fantasy managers were dropping him.

His offensive line and receiving corps was a mess due to injuries, and Wentz looked lost. But, thankfully, he rallied as a Fantasy quarterback. For the past five games, Wentz has scored at least 21 Fantasy points, including the past two outings against the Ravens and Giants with at least 31 points.

It hasn’t been pretty, as Wentz has a turnover in every game and is completing just 58.6 percent of his passes, a career low. But two things are working in his favor — volume and rushing. Wentz is on pace for 635 pass attempts, and the Eagles are top five in pass attempts in the NFL for the season. Wentz also has a career-high five rushing touchdowns already, and he’s run for at least 37 yards in three of his past five games.

He also could be getting reinforcements this week with Jalen Reagor (thumb) likely back to join Travis Fulgham and Greg Ward; Dallas Goedert (ankle) could return as well. But even if Goedert is out, Richard Rodgers can be a serviceable replacement at tight end — for Wentz and Fantasy managers. On the offensive line, Jason Peters (knee) and Lane Johnson (knee) could play this week, which would be a huge upgrade.

This week, Wentz should love playing the Cowboys, who have allowed multiple touchdowns to five of their past six opposing quarterbacks. Over that span, Matt Ryan, Russell Wilson and Kyler Murray each scored at least 32 Fantasy points against Dallas. And Wentz has at least 20 Fantasy points in three of his past four meetings with the Cowboys, including two games with at least 24 points during that stretch.

HOWIE TRASHES WENTZ, WHO MELTED DOWN WHEN HURTS WAS DRAFTED!

One thought on “YOU’D BE A FOOL NOT TO JUMP ON EAGLES WENTZ IN FANTASY TONIGHT!”