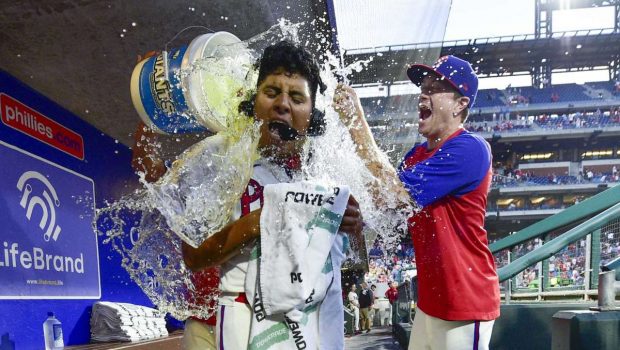 Zack Wheeler is having a Cy Young season.

But, at the risk of being blasphemous on Sunday morning:

Right now at least, the Phillies most valuable pitcher is Ranger Suarez, who is keeping them in the playoff race.

Suarez pitched a four-hit shutout, Bryce Harper homered and the Phillies beat the Pittsburgh Pirates 3-0 for their fifth straight win.

The Phillies stayed 1 1/2 games behind Atlanta, who beat the Pads, in the NL East. And they visit the Braves in a three-game series beginning Tuesday.

“We had a number of guys that weren’t available today out of the bullpen, so we would have had to rely on some inexperienced kids if Ranger didn’t do what he did.”

Suarez (7-5) allowed just four singles, walked none and struck out seven in his first major league complete game. He didn’t permit a runner past first base and faced only one batter more than the minimum, keeping the Pirates off-balance and generating a lot of weak contact.

Moved from the bullpen into the rotation in August, the 26-year-old lefty had never thrown more than 6 2/3 innings in a game prior to this outing. But he was efficient with his 97 pitches and seemed to get stronger as the game wore on, striking out four consecutive batters in the seventh and eighth innings.

It’s been an eventful year for Suarez, who was late arriving to spring training because of travel issues related to COVID-19. That delayed the start of his season.

When he first joined the Phillies in May, he was a multiple-inning reliever. He then shifted to more high-leverage roles and was even the team’s closer for a short time before joining the rotation.

“I always try to go out there and do my best to attack hitters,” Suarez said through a team interpreter. “Today I felt I had good command of my pitches, more than usual, especially my slider.

Harper hit his 34th home run and Matt Vierling hit his first major league homer as the Phillies (81-74) improved to a season-best seven games over .500.

Vierling and Harper both hit solo homers in the third off Will Crowe (4-8). Vierling also singled and walked.

“It felt pretty good,” Vierling said. “It had been a little while since I hit one and some of the guys were giving it to me here and there. .. The way my swing works, if I catch the ball on the barrel, it allows me to hit it hard. Right now, it’s going pretty good.”

Brad Miller added an RBI hit in the fifth inning to give Suarez an insurance run.