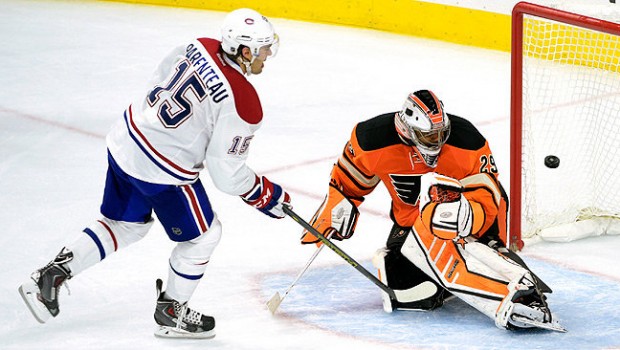 It was a night when Flyers fans felt confident.

After all, their favorites took a 3-0 lead into the third period against the Montreal Canadiens at the Wells Fargo Center but somehow lost 4-3 in a shootout.

When coach Craig Berube was asked if this total domination after the second period was more Montreal playing great or the Flyers stinking it up, he responded with one word:

At one point, Berube called time out with the Flyers leading 3-1 to plead for his team to stop standing around and start getting the action into Montreal’s end.

When play resumed, Montreal scored on its next shift to make it 3-2.

Eventually, the Habs got the tying goal by Alex Galchehyuk at 14:40, then won it in a four-round shootout after the Flyers did nothing with a full two-minute power play.

“When they got the first goal, we stopped playing,” Berube said after P.A. Parenteau won it for Montreal (photo above) by scoring the only shootout goal after goalies Ray Emery and Carey Price stopped seven shots in succession. “We started watching.”

After two periods, the Flyers were up 3-0, outshooting Montreal 27-17 and committed just seven giveaways.

In the third period, Montreal scored all three goals, led 15-4 in shots and the Flyers were charged with nine turnovers.

The Flyers finally were credited with their first shot of the third period 10:01 in on a harmless 97-foot wrist shot by Matt Read.

“I think we just sat down and waited for them to come at us,” right wing Jakub Voracek said.

“It’s not baffling,” Berube said. “It’s a mental thing. I think we went through it last year at times. … There might have been four or five of them at the start of the season where we had leads in the third period and lost them.”

If you remember, the Flyers lost their first three games last season, fired Peter Laviolette, hired Berube to be the new coach and then ended up falling a franchise-worst 1-7 start before becoming a playoff team.

These Flyers are 0-2-1 early into a very difficult October schedule that has next playing the powerhouse Anaheim Ducks at home on Tuesday night.

After that, the Flyers head on the road to play Dallas, Chicago and Pittsburgh, return home to play Detroit and Los Angeles, then visit Tampa Bay.

Berube’s glass-half-full take is not forgetting how well the Flyers played in the first two periods Saturday against a strong club that made it to the Eastern Conference finals last season.

“It’s a good team. They’ve just got to have more confidence. They gotta close out games. That’s what it’s all about.”