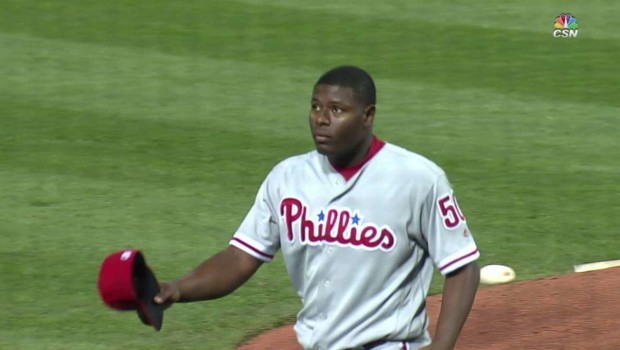 Jeremy Hellickson was cruising. He’d flown through seven innings with a solo home run the only damage. He’d struck out the side the inning prior.

But Hector Neris, with his mid-90s heater and bottom-dropping split finger, was too tempting an option for Pete Mackanin.

The Phillies skipper lifted Hellickson for a pinch-hitter in the bottom half of the seventh. By the end of the next half inning, the Nationals had taken a lead they would not lose, beating the Phillies 4-3 last night.

Mackanin afterward still called Neris among the best in the game. And for his first 26 appearances, he had been. But he wasn’t last night.

Neris faced seven batters in the eighth inning. He retired only two of them, gave up two hits and walked three more. Three Nationals runs had scored by the time Jeanmar Gomez had recorded the final out of the inning.

“I can’t remember the last time a team got three runs off of Neris,” Mackanin said. “Two outs, man on first and he just couldn’t control that split.”

The backend combo of Neris and Gomez had been effective. But no bullpen can go a season without allowing runs, and for it to only allow runs when it doesn’t cost its team a game is next to impossible.

The Phillies bullpen hadn’t hit many bumps after its rough start to the season, though. Gomez, Neris and David Hernandez had combined for a 2.09 ERA before Monday. Neris had been the best of the bunch, averaging almost 12 strikeouts per nine innings and allowing just four runs in 28 innings. Then, in two-thirds of one, the Nationals nearly matched Neris’ season total.

Hellickson, who had been brilliant though seven, was surprised to get the hook so early.

“I obviously would have loved to have a chance to finish that game,” he said. “I felt like it was my game to win or lose.

Neris has a closer’s mindset, though — something that’s required of any effective relief pitcher.

“I know I’m better than that,” Neris said. “Everybody has a bad night in their career in baseball. Ready for tomorrow.”