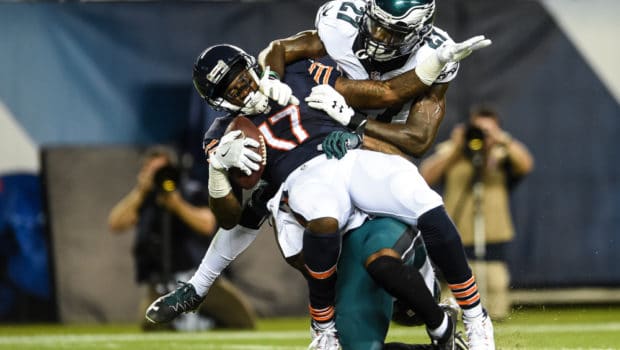 ESPN Eagles reporter Tim McManus is projecting Mills (above, defending new Eagle Alshon Jeffery) to be a starter on the Eagles’ defense this upcoming season. As a rookie seventh-round pick in 2016, the former LSU Tiger predictably struggled. He was PFF’s lowest-graded cornerback last season (34.5 overall) while allowing a catch for every 7.1 coverage snaps (ranking 112th out of 117 qualifiers). Despite his rookie bumps, Philly’s coaching staff have admired the resilience of their seventh-round corner. After allowing a first-down reception, Mills allowed a catch on 20 of 31 passes subsequently, giving up only eight first downs and no scores: