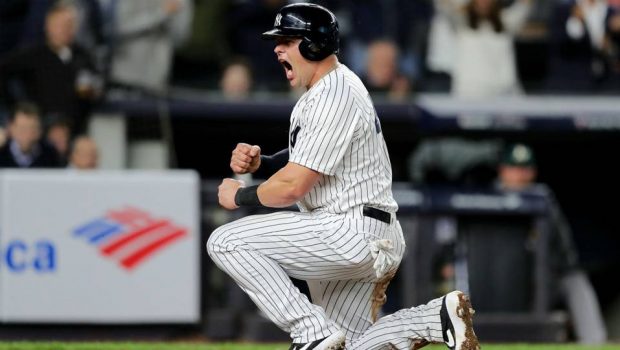 The Yankees are heading to Boston this morning to play the Red Sox in the best-of-five American League Division Series Friday at Fenway Park after a champagne celebration in their clubhouse following a 7-2 wild-card playoff win over the dangerous Oakland A’s, who simply weren’t ready for prime time.

Listening to late-game chants of “We want Boston!” and “Boston Sucks!” as Aroldis Chapman finished off the A’s in the ninth, the Yankees won the way they did a majority of their 100 regular-season wins: power hitting, bullpen and good enough starting pitching.

It wasn’t lost on Yankees manager Aaron Boone, either.

“With Cutch [Andrew McCutchen] leading off, getting on base. And then Judgey [Aaron Judge] with a big swing [a first-inning home run] and Sevey [starter Luis Severino] doing what he did, we just built some steam from there,” Boone said. “Even though he couldn’t get deep, he was good when he was in there. And then you see the bullpen coming in and being as effective as they were.

“That’s a good look at what we did when we’re at our best.”

Boone said of his team facing the Red Sox, “I think they can’t wait. They’re ready to go against the game’s best this year. We know how good they are. We have to play our best to beat them. They’re very tough at Fenway. But our guys can’t wait to get there and get it done.”

While many Red Sox fans were tired of the Red Sox/Yankee matchup and wanted something new for the playoffs, let’s face it, this is the most compelling matchup. The AL East archrivals hadn’t faced each other in the postseason since the 2004 AL Championship Series, a span of 14 years: