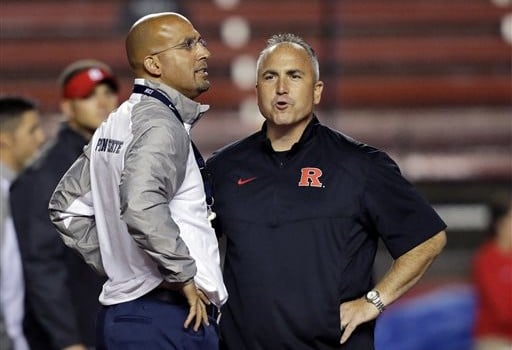 On the eve of Rutgers’ supposed revenge game this Saturday at Penn State’s Beaver Stadium, the Scarlet Knights will have to make do without their coach!

Kyle Flood (above right with Nits’ coach James Franklin in 2014) has been suspended three games and fined $50,000 for violating university policy about contacting faculty about a player’s academic status.

University president Robert Barchi, the former provost at the University of Pennsylvania, said Flood “circumvented established policies and procedures” by emailing a faculty member and later scheduling an in-person meeting to discuss the academic standing of former cornerback Nadir Barnwell.

After emailing the faculty member from his personal account, Flood was told by a member of Rutgers’ academic advising staff not to contact professors about student-athletes, but he still went ahead with the in-person meeting. According to Rutgers’ full investigative report, “Flood stated he may have told the advisor that he used his [personal email] account to avoid an [Open Public Records Act] request.”

Flood and Barnwell both admitted that Flood also made minor changes to a paper that Barnwell submitted to the professor, who had agreed to review it as “partial satisfaction for the requirements of a course the student had already completed.”

“It is clear to me that Coach Flood had inappropriate communications with the faculty member in violation of an established policy,” Barchi wrote in a letter released Wednesday. “The policy is well-known among staff in the Department of Intercollegiate Athletics. Coach Flood is specifically tasked with knowing both NCAA and our institutional policies regarding these issues.

“Simply, Coach Flood has no excuse for not knowing the rule and following it.”