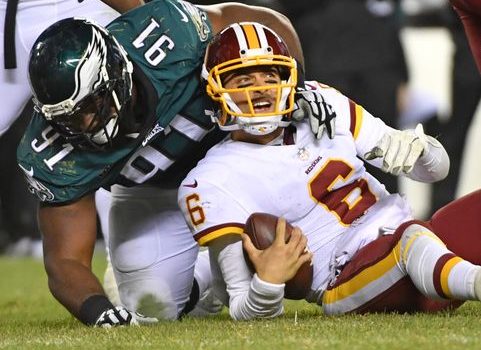 Let me see if I get this right.

Leaving them with suck-ass Mark Sanchez (above) as their starter.

And now, with a 6-6 record and a viable shot at a playoff berth, they’re choosing Josh Johnson and ignoring Colin Kaepernick, who has been blackballed for a year because he had the temerity to take a knee during the national anthem, protesting the way African-Americans have been treated by police!

The same Josh Johnson who last threw a pass in an NFL regular-season game on December 11, 2011.

49ers cornerback Richard Sherman, a member of the NFL Players Association’s executive committee, had more to say on the point.

“I think it’s one of those situations where, it’s disappointing, but that’s exactly the case, you know, because there’s nothing legally stopping the teams from doing it,” Sherman said in an appearance on the #PFTPM podcast. “There’s not enough public pressure, nothing that’s going to force a team to [sign him], you know? . . . Like at it first it was, ‘Colin Kaepernick’s stats weren’t good enough’ or ‘he stopped playing at a high level,’ and then you see some of the quarterbacks that they picked up and you’re like, ‘Well, you know, if you’re picking up Mark Sanchez, he’s has some up and down years.’ Colt McCoy’s the same way. They’ve had up and down years and Colin has played at a higher level than I would say any of those guys ever performed at the peak of their careers. You start to see stuff like that and it’s almost like teams are purposefully making it obvious that, like, they’re keeping him out. Unfortunately there has, to this point, been nothing that the courts or the league has done about it and that’s the disappointing part, because these good football players didn’t commit a crime, he didn’t put his hands on anybody, murder anybody, you know, do anything that’s that insanely crazy that he deserves to be banned from our football league.”

A week after claiming linebacker Reuben Foster on waivers after his second domestic violence arrest this year, Washington continues to shun Kaepernick. And even though Washington may have discussed Kaepernick, a league source recently told Pro Football Talk that Washington president Bruce Allen has previously made it clear internally that there was and would be no interest in Kaepernick.

With a hearing coming on his collusion grievance, Washington’s refusal to even give Kaepernick a call will make it even more clear that something fishy is going on, which based on the evidence could set the stage for a finding that there was, and still is, a coordinated effort to keep Kaepernick out of the NFL.