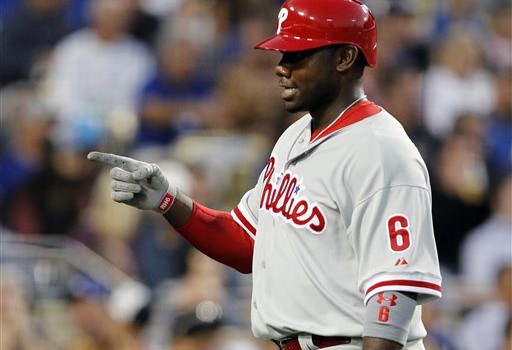 WTF!!!! PHILLIES WILL BE STARTING RYAN HOWARD AT FIRST BASE

It’s hard to believe but Phillies Nation better be prepared to see the massively overpaid and underperforming Ryan Howard at first base.

“Right now, unless he gets unseated, he’s the first baseman,” Ryne Sandberg said. “He needs to prepare himself to be the best first baseman he can be.”

But certainly it is not a stretch to think Howard feels a little unwanted or unappreciated. That could create tension in camp.

Sandberg said he spoke with Howard about a month ago.

“I know he’s got a lot of things off his mind, coming from him,” Sandberg said. “Ryan was very positive with the conversation. He wanted to be part of the process here with the younger players that we might have in camp. Be that type of a guy. He’s been a Philadelphia Phillie. He considers himself a Phillie right now so for him to take pride in that and going forward help out with the process, that’s something he can also help out with.

“We can get younger around Ryan Howard and have some youth and some hop around him. Like I said, if he gets to where he can really contribute, I’m anxious to see him and see where he’s at and to see if he can be a guy who can raise his game and help us win. I’m confident in Ryan in bouncing back and having that type of year.”