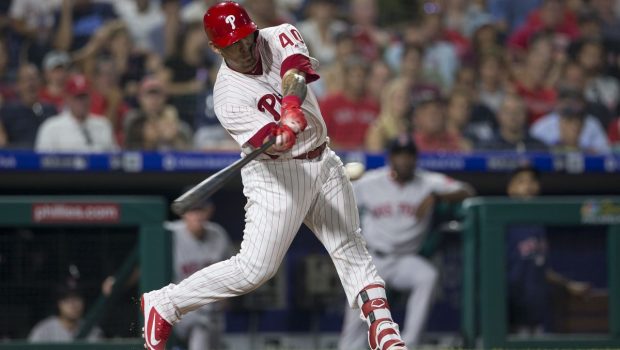 So, Phillies catcher Wilson Ramos hit .412 (7-for-17) with four doubles, one triple, four RBIs and a 1.176 OPS in his first four games since joining the lineup last week.

But he didn’t start against the Nationals last night in the Phillies’ 1-4 defeat.

So, manager Gabe Kapler, what’s up?

Kapler explained that Jorge Alfaro is 5-for-7 with one double, one home run and three RBIs in his career against Nationals right-hander and starter Tanner Roark.

Kapler also said the Phillies want to be careful with Ramos following a nearly month-long stint on the disabled list because of a strained left hamstring.

“Two consecutive days off is going to give him a chance to repair his body,” Kapler said.

The Phillies also played Roman Quinn in right field, putting Nick Williams on the bench. Quinn has been playing more in center field recently, particularly as Odubel Herrera has struggled.

But Herrera entered the game hitting .417 (15-for-36) with five doubles, one home run, six RBIs and three walks in his career against Roark. Williams was 2-for-13 with two walks and six strikeouts against Roark.