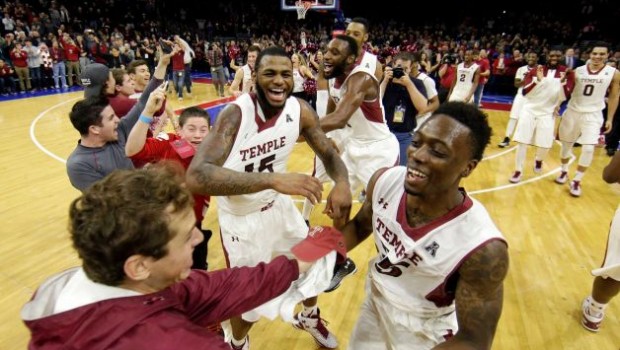 WTF! UCLA MAKES THE DANCE BUT TEMPLE PLAYS IN THE NIT?????

The Owls stomped Kansas by 25 points, and the Jayhawks got a No. 2 seed in the NCAA while Temple gets Bucknell in the NIT!

Are you kidding me?

UCLA makes the Big Dance and Temple gets snubbed?

UCLA had a mediocre season, as you might have heard on the tournament selection show on CBS where Doug Gottlieb pitched a fit about it loudly and also to the dope who chaired this year’s selection process.

Temple won 23 games, had a sky-high RPI of 34, beat Kansas like a stick, for God’s sake, and it is relegated to the NIT to play Bucknell!

Temple is a No. 1 seed in the second-rate NIT and will host Bucknell in a first-round game Wednesday at 7.

But the fact they almost got in was of little consolation to the players.

“It’s disappointing,” said senior guard Will Cummings. “It’s like a slap in the face. I’m not sure what goes into (picking the teams). I’m still trying to soak it all in.

“We just have to regroup. Win the NIT and make some noise.”

Almost all of the so-called “bracketologists,’’ those who project who will be in the NCAA tournament, had the Owls getting in, albeit as one of the final four teams to get an at-large bid.

However, the American Athletic Conference, ended up with only two teams making the field, nationally ranked SMU as a No. 6 seed and Cincinnati as a No. 8, an indication the committee was not impressed with the league, even though an AAC team, Connecticut, won the championship last year.

“The committee had a job to do and we have to live with it,” said Temple coach Fran Dunphy. “We had the second-highest RPI of any team that did not get in (Colorado State was 28th). We were probably one win short of making it. I don’t know if it was a lack of respect for our conference.

“We had three chances to beat SMU and we didn’t do it. We didn’t win our league so we’re reduced to hoping. One more win and we’d be dancing.”

Many experts were surprised UCLA made the tournament instead of Temple.

But while the outside experts can all agree Temple should have made it over a number of teams that did get in, the bottom line is Temple ‘s Road to the Final Four is now aimed at Madison Square Garden, where the NIT’s last two rounds are held.

“Hopefully, we can rise to the occasion,” said Dunphy. “The angst is over but the disappointment remains. Let’s see what we can do.”