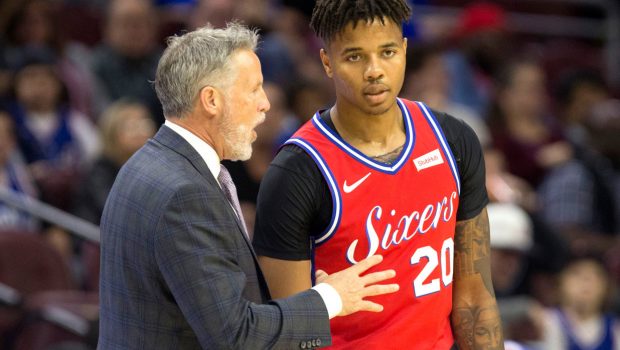 WTF! NOW FULTZ’S MOM IS TAKING SHOTS AT THE SIXERS!

And now Fultz’s mom is getting into the anti-Sixers act!

Fultz was traded to the Magic ahead of last week’s trade deadline, but that hasn’t stopped Fultz and others from throwing veiled criticism at the Sixers.

This time it was Fultz’s mother, Ebony, who had an interesting comment about where her son came from and how much better his new situation is, per The Athletic‘s Josh Robbins.

“I get a great vibe,” Ebony Fultz said. “It’s very refreshing to hear the positivity, the support that they have for (the players) and the fact that they’re constantly saying, ‘We want to do this the right way.'”

Was anyone ever more positive than Brett Brown?

Even in the face of a 10-win season a few years ago and was still effusive in his praise of his players. He managed to get a roster that was assembled to lose to play hard every night.

Brown also gave Fultz a starting spot at the beginning of the season – a spot that was unearned, with all due respect. Brown took JJ Redick out of the NBA’s No. 1 starting unit, one that helped the team win 52 games last season, to attempt to boost the confidence of the second-year guard.

The Sixers organization gave Fultz every opportunity to succeed. There was never a negative word that came out of their camp throughout Fultz’s injury issues and struggles. In fact, quite the opposite.

Brown said this in November after the team was blindsided by news that Fultz would be seeking outside medical opinions per his agent’s advice:

“This news about his shoulder, it did catch me off guard,” Brown said. “But if it’s that real that he needs to go seek further consultation, then we support him. In my eyes, it’s not complicated. That’s what it is, and we’ll support him.”

Does Fultz’s mom think the organization wanted her son to fail? The player they drafted No. 1 overall after giving rival Boston a first-round pick to move up two spots from No. 3? How are you going to rip the patience of an organization that has developed a reputation for holding out first-round picks for entire seasons because of injury?