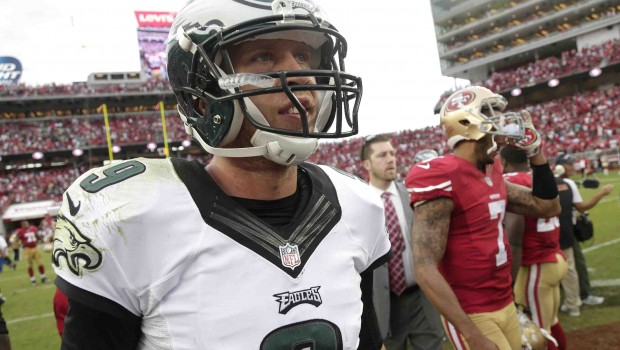 WTF IS THE MATTER WITH EAGLES' QUARTERBACK NICK FOLES?

Foles looked dazed as he left the field yesterday in Santa Clara.

It wasn’t that close.

This game was ugly for Chip Kelly’s offensive attack, and raised big questions about what’s wrong with Nick Foles.

Foles, the Eagles quarterback who had a phenomenal season last year, struggled mightily on Sunday. He completed just 21 of his 43 passes for 195 yards, with no touchdowns and two interceptions. He made bad decisions, missed open receivers and generally looked like he didn’t know what he was doing.

The Eagles took an early 21-10 lead despite their offense doing absolutely nothing in the first half: Philadelphia’s first touchdown came when Brad Smith recovered a blocked punt in the end zone, the Eagles’ second touchdown came when Malcolm Jenkins intercepted a pass and ran 53 yards for a touchdown, and Darren Sproles added an 82-yard touchdown on a punt return.

But those touchdowns on defense and special teams weren’t enough to beat the 49ers. Frank Gore had a sensational game, running for 119 yards and also scoring on a 55-yard reception. Colin Kaepernick picked up 58 yards with his feet and completed 17 of 30 passes for 218 yards, with two touchdowns and one interception.

Several players on both teams missed time with injuries, but the most noteworthy to keep an eye on going forward will be the back injury suffered by 49ers tight end Vernon Davis. If Davis is out for any significant period of time, that would hurt.

But right now, the 2-2 49ers are feeling good about where they stand. The Eagles are 3-1, but after their first loss they can’t feel good about their quarterback.

This was a big game, and Foles laid an egg.