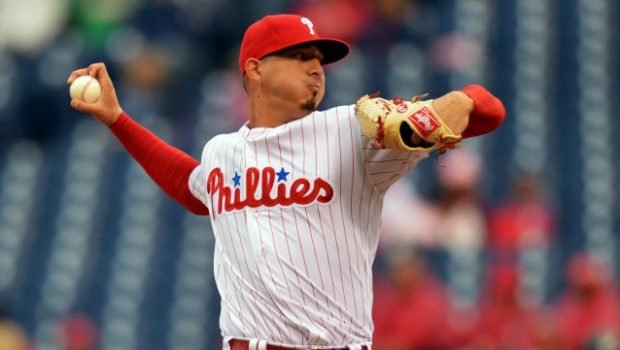 WTF IS THE MATTER WITH FORMER PHILLIES WHIZ VINCE VELASQUEZ!

It seems like forever since Phillies starter Vince Velasquez struck out 16 in a shutout against the Padres at Citizens Bank Park.

Velasquez would like to finish the season more like that pitcher than the one who faced the Dodgers in his last two starts.

He struck out 10 in last night’s 15-5 loss to the Dodgers, but he also allowed seven hits — including three homers — and five runs in 5 2/3 innings in a game that featured a solo home run, a grand slam and two curtain calls from Dodgers second baseman and Phillies icon Chase Utley.

“I don’t really know the guy myself, but to have an ovation like that is incredible,” Velasquez said. “He’s a legend here.”

It was a fun night for Phillies fans celebrating the greatest second baseman in franchise history, but it has not been a fun week for Velasquez. He has allowed 18 hits, 14 earned runs and six home runs in 10 1/3 innings in his two starts against the Dodgers.

“I can’t express how tough this team is,” Velasquez said. “Their approach is difficult.”

Velasquez will have opportunities to turn things around in the season’s final few weeks, but how many more opportunities he’ll get remains to be seen. The Phillies have been monitoring his workload, and he has thrown 113 innings to this point.

“As of right now, I don’t know what they have planned,” said Velasquez, who has a 7.24 ERA in his last five starts. “I know I don’t want to stop right now. The stage that I’m at and what I’m doing right now, I kind of want to finish on a better note. This is a tough time. I’m glad it’s the last time I’m facing them.

“I’m not perfect. I’m not [Clayton] Kershaw. It takes years to deal with a lineup like that and to be proficient. Tomorrow I’ll go back to the drawing board and watch film and just be consistent.”