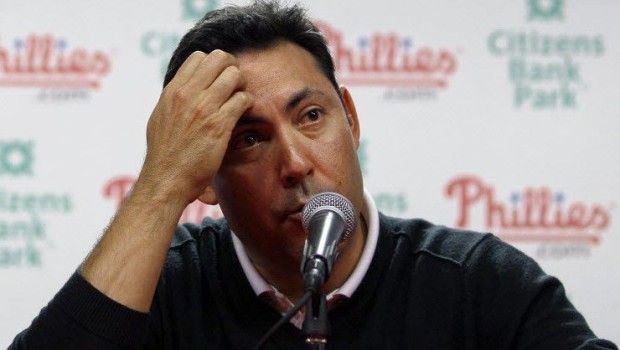 Ruben Amaro Jr. successfully unloaded some of the best players in Phillies history (whom he overpaid, by the way) in a fire sale that MAY HAVE replenished the minor league system. But he is tone-deaf when it comes to the fans and what they want and he is arrogant to boot. Is this the man the Phils want as the public face of their franchise?

The Phillies have turned one of the weakest minor league systems in baseball into arguably one of the best in a little less than nine months.

They traded Cole Hamels, Jimmy Rollins, Chase Utley, Jonathan Papelbon, Ben Revere, Marlon Byrd, Jake Diekman and Antonio Bastardo for a combined 14 prospects, including three that rank among the top 64 in baseball, according to MLBPipeline.com. They have three other prospects in the Top 100, which is why MLBPipeline says the Phillies have the No. 7 system in baseball.

Could it help bring back Phillies general manager Ruben Amaro Jr., whose contract expires after the season?

“No decision has been made on Ruben at this point,” Phillies president Pat Gillick told MLB.com in a telephone interview Tuesday evening. “We just got by the trade deadline. Consequently, we’re moving a lot of people in the minor leagues from [Jerad] Eickhoff to [Alec] Asher and others. We’ve had our hands full. It’s a decision that will be made in the next 30 days or so.”

Gillick is stepping down after the season and Andy MacPhail is taking his place. MacPhail is not granting interviews, so he did not comment for this story. But certainly MacPhail, Gillick and the rest of Phillies ownership, including the very visible John Middleton, will be involved in the final assessment.

“It’s going to be an organizational decision,” Gillick said.

Gillick has repeatedly said he has confidence in Amaro. He said Amaro handled himself as expected before both trade deadlines.

Asked if he thinks Amaro should be back next year, Gillick said, “I’ve always said he’s smart, he’s confident. He didn’t all of a sudden get dumb. I’ve said that a number of times. We had four bad years. We had three good years before that. Unfortunately, people just remember what you did yesterday. It’s like any business. It’s a tough business.”

Of course, many fans would like to see a new general manager, which could influence ownership or MacPhail or both.

Gillick said fan sentiment is “certainly a small part” of the decision-making process.

“There are some good things happening with the Phillies. Consequently, if I was Andy I would just say, evaluate, take your time, somewhere along the line you might want to make an adjustment, but overall we’ve got a good group.”

The Phillies certainly are not rushing the announcement, even with the Angels, Mariners, Brewers and Red Sox already looking for general managers.

“Not particularly with the general manager, but just on everything I think we move a little bit slower and hopefully we’re a little bit more considerate in making our decisions,” Gillick said. “We contemplate a little more than other people.”

But now that the non-waiver and waiver trade deadlines have passed, what more can Amaro do to prove himself? Is there anything new anybody can learn about Amaro between now and the moment they make a decision?

“My focus is on the organization and what we need to do to take the next step forward,” Amaro said Tuesday. “Are we going to be a contending team next year? I think that’s a stretch. Should we be thinking about ways to continue to build the organization, so in 2017 we’re starting to creep that way? It’s about continuing to develop the young players we have. How long will it take? Who knows? But that’s the goal.”

Amaro said he is excited for the future. But will he be part of it?