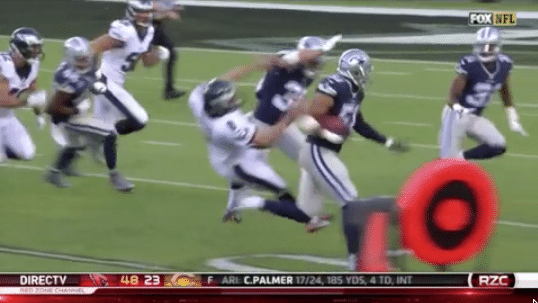 You knew the Eagles weren’t going to stage a comeback against the Cowboys when their offense stalled again to open the second half and the resulting punt led to the first touchdown of the day.

Last Monday night the Birds fell behind 20-3 at the half and rallied to lead before losing 26-24.

But yesterday at the Linc, Danny McCray blocked Donnie Jones’ punt and Kyle Wilber scooped it up for a 26-yard score. The touchdown and ensuing extra point extended Dallas’s lead to 13-0 with 12:35 to go in the third quarter.

It initially looked like the score would not count because officials threw a flag for a blindside block on Cowboys defensive back Jeff Heath, who got in Jones’s way as Wilber was making his way to the end zone (above).

The officials picked up the flag after a conference, which was a questionable decision based on both the replay of the block and, according to Mike Pereira of FOX Sports, Jones’s status as a defenseless player.

Jones got some medical attention at the end of the play, but was able to punt the ball away after the hapless Eagles offense went three-and-out following the touchdown.