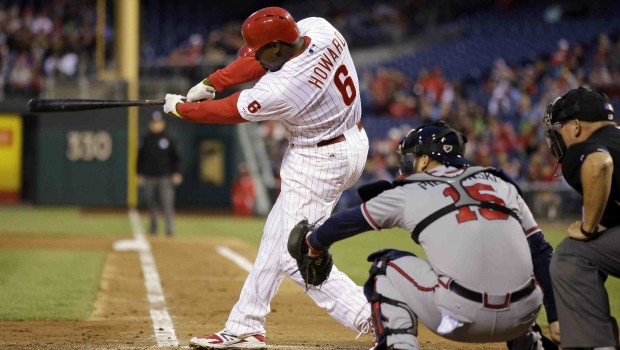 Regular readers of FastPhillySports.com are well aware that I think morning radio clown Angelo Cataldi is a useful resource because:

He is always wrong.

He makes up wild-ass rumors like Josh Harris moving the Sixers to Newark, where he also owns the Devils. And no matter when the NBA commish says, when Cataldi says it the rest of his witless WIP blowhards repeat it as if it were gospel.

For your information, the Sixers are not moving to Newark, though they are building an office/practice facility in Camden.

But every once in a while Cataldi says or writes something that is dead-on, just like a broken watch is right twice a day.

This morning he wrote:

Ruben Amaro Jr. is blowing another big opportunity right now. The Phillies GM should hold an auction — today — for the services of Ryan Howard, whose hot streak has re-established himself as an appealing option on the trade market. Amaro said last week that nothing was happening with Howard. Then make it happen.

Now is the time to trade Howard before he cools off, which he surely will, or gets hurt again, which I hope he does not. His resurrection at the plate has been truly inspiring, but it isn’t likely to last very much longer. And the Phillies could finally get rid of his Big Piece of a salary and get in return some prospects that will help the Phils’ rebuild.

As of this morning, his stat line is:

True, he cannot field very well, so it makes perfect sense to trade him to the American League, where he wont have to play the field, and NJ.com came up with a list of teams that make sense:

Perhaps GM Ruben Amaro Jr., who stated last December that the Phillies are better off without Howard, now will be able to work a deal. He is still owed about $53.75 million in a five-year, $125 million contract that runs through 2016, but Amaro apparently is willing to eat a big portion of it.

There are a few American League clubs in which he seemingly could be a good fit at DH.

Howard has a full no-trade clause, but the guess is at this point he’d waive it to go to any team that would embrace him for who he is now, not what he was from 2006-11 or how big his paycheck is.

Here are the Phillies’ 5 best hopes to deal Howard:

1. TAMPA BAY RAYS
The Rays, contending again in the AL East with a smallish $75 million payroll, could use Howard’s power. He offers more than DH David DeJesus (.330, 4-18) or first baseman James Loney (.267, 2-11). Meantime, Howard would love a deal to Tampa Bay because he recently moved into a mansion on Belleair Shore, Fla., which is a 15-minute drive to the Rays’ ballpark in St. Petersburg.

2. LOS ANGELES ANGELS
The Angels handed the DH duties this season to young right-handed slugger C.J. Cron (.200, 1-6), who has been a big disappointment.

3. HOUSTON ASTROS
The AL West-leading Astros have been baseball’s biggest surprise this season despite hitting a major league-low .228. Howard would be a better option at first base over Chris Carter (.168, 7-20) or DH over Evan Gattis (.187, 8-25).

4. BALTIMORE ORIOLES
Would the Phils consider dealing Howard to Baltimore for first baseman Chris Davis (.211, 8-21), who also has a 50-homer season? Davis would be off the payroll after this season, compared to 2016 for Howard. Hot-hitting DH Jimmy Parades (.355, 6-23) wants to play the field and could move to first with Howard sliding into a DH role.

5. MINNESOTA TWINS
The Twins, after four losing seasons in a row, are off to a nice start under new manager Paul Molitor, but badly could use a big bat. Joe Mauer is set at first, but Howard would fit in nicely at DH. Kennys Vargas (.248, 3-10), used at DH 21 times this season, was optioned to Triple-A on May 17.