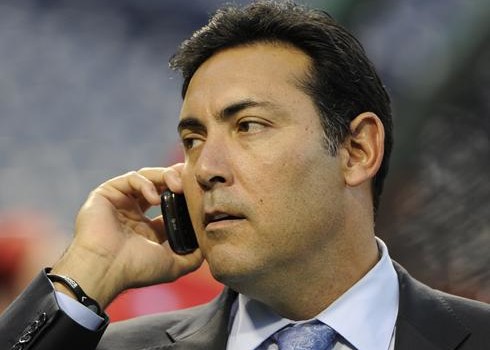 WTF? AMARO WILL SCREW UP PHILS MORE BEFORE MACPHAIL STARTS!

Does Andy MacPhail not know how much more damage failed general manager Ruben Amaro Jr. (above) can cause as he flails around trying to get top value in trade for Cole Hamels, Jonathan Papelbon and Aaron Harang so that the rebuild can actually start?

I’m sorry, but even when the Keystone Kops-like Phillies come to the right conclusion they still seem to screw it up.

Naming experienced baseball man Andy MacPhail as the club’s new president is a swell idea, but really, why is he not starting until after this season is over.

Owner John Middleton and the Buck brothers have been talking to MacPhail since January!

Has MacPhail’s head been in the sand since then, so he is not aware of how badly this once lofty franchise has fallen?

“I think my three main functions are going to be to read, to watch and to listen,” MacPhail said at a news conference here, “and then hopefully in three months I’ll have a clear idea of what I think is appropriate and needs to be done.”

Check back in October, three months after the July 31 trade deadline, at which point — if the Phillies care about their future, immediate or otherwise — they should be peddling off what assets they have. Those deals will be orchestrated by …

“Really, the trading of players, and the movement of players,” Gillick said, “that’s in the hands of the general manager.”

Wait. The current general manager? That’s Amaro. He assumed his position after Gillick stepped down on Nov. 1, 2008 – three days after the Phillies won the World Series. Yet when Gillick was asked Monday about what MacPhail’s hiring meant for Amaro’s future, his answer lasted nearly 70 seconds and 167 words. None of those words included “Ruben Amaro Jr.”

Later, to a smaller group of reporters, Gillick said of Amaro: “Ruben is the GM through the end of the season. He’s going to make any of the deals that we make.”

What happened here Monday wasn’t a changing of the guards, but an appointment to change the guards at some point in the future, when the guard foreman gathers all the information he needs about the guards – including getting a handle on the methods they’ve used to allow prisoners to escape and run amok – and then, eventually, inserts himself.

The news conference was, really, a chance for the 62-year-old MacPhail – who previously oversaw rebuilding projects with the Twins, Cubs and Orioles – to downplay his own acumen because he has been away from the game for three years, during which time he traveled the world. “If I was Pat,” MacPhail said at one point, “I wouldn’t pay too much attention to what I had to say.”

This, ostensibly, allowed the Phillies to facilitate a no-one-gets-hurt transition to MacPhail’s regime. Manager Ryne Sandberg, anticipating mass upheaval, removed himself from the mess when he resigned Friday. Now we’re supposed to believe that MacPhail is just going to watch and listen as Amaro goes about his regular day?

“You’re going to try hard to stay as open-minded as you can,” MacPhail said, “and not come in with any preconceived notions of what needs to be done.”

Among Amaro’s notable handiwork is, of course, the five-year, $125-million contract issued to first baseman Ryan Howard, beginning in 2012. Howard’s OPS pre-deal: .928. Howard’s OPS post-deal: .721. Such moves can contribute mightily to the paralysis of a franchise.

Yet there are other moves, too. At the trade deadline in 2011, with the Phillies poised for another run, Amaro traded a package of prospects to Houston for outfielder Hunter Pence. Gone in the deal: Jon Singleton, poised to be the Astros’ designated hitter or first baseman for years, and starting pitcher Jarred Cosart, whom Houston flipped for Jake Marisnick, now the starting center fielder on a first-place club. Pence? Amaro sent him to San Francisco a year later at the deadline for a bag of baseballs and some fungoes. Oh, and Nate Schierholtz. Pence has since been the right fielder on two World Series champions.

But for all the bad decisions that put the Phillies in this position, indecision may have been a more significant factor The Phillies’ farm system needs restocking. Baseball America, the trade magazine, ranked it 21st in the game entering the season with just three of the game’s top 100 prospects. (The Cubs, conversely, have three of the top 12.) Yet given the opportunity to deal pieces for prospects last summer, Amaro instead hung onto outfielder Marlon Byrd and reliever Antonio Bastardo, for example, until after the season. So they could, what? Help the Phillies win 73 games?

And this is the guy who’s going to determine the fate of lefty Hamels, the centerpiece of this summer’s trade market?

“Our primary, in fact, paramount concern was the team’s on-field performance, and the need to improve it, and to get us back to the winning ways we enjoyed from 2007 to ’11,” said Middleton, a minority partner in the club who represented ownership at the news conference. “In fact, it was not just our primary objective. It was our first, second and third priority.”

Hiring MacPhail would seem to address that. But is this supposed easing-in plausible? Could Amaro have a deal this July for Hamels, one with which MacPhail isn’t comfortable, and still pull the trigger? It seems at the very least backward to have the man who got the franchise in this position – both on pace for its worst major league season since 1961 and without a full inventory of palatable prospects – also be the one to try to extract them from the depths, all with a new boss simply riding shotgun, idle.

“If he asked my opinion, I’ll give it and explain why,” MacPhail said.

The reality: Monday represented a sea change in Philadelphia, one that was a long time coming. Middleton, in his opening statement, clearly outlined the expectations by saying, “We all remember the great parade in 2008,” and “You will have access to whatever resources you need to succeed” and “The mandate is to win.”

The slow erosion of a proud franchise has been difficult for the fans of this city to watch – and so they aren’t. The Phillies are down more than 5,700 fans per game to this point in the season, on pace to barely draw more than 2,000,000 – a stunning drop from a peak of nearly 3.8 million in 2010.

The performance at Citizens Bank Park matters. The empty seats matter. The prospects in the minors matter. None are satisfactory at the moment, and it’s difficult to imagine MacPhail signing on for a project he doesn’t get to try to improve right this very minute.