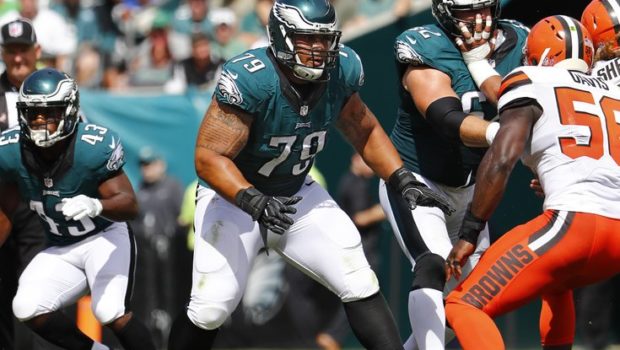 What is going on with Eagles right guard Brandon Brooks?

On Sunday — for the second game in three weeks — the Eagles played without Brooks, one of the team’s key free agent acquisitions during the offseason.

Following Sunday’s 27-22 loss to the Redskins, head coach Doug Pederson was asked about the mysterious stomach illness that’s now manifested twice in the last 21 days, both of which happened to be days the Eagles were playing.

Given that Brooks was such a late scratch – he was actually at Lincoln Financial Field on Sunday morning preparing as if he was going to play – it was understandable for the first-year coach to not yet have an answer as to why.

“We have not yet [received any additional information]. That’s something we’re going to continue to explore today with him and just see. It’s obviously unfortunate, but we need to get to the bottom of it and just find out why. ”

Prior to the team’s Week 12 loss to the Packers, Brooks was taken to the hospital with a stomach illness that, much like on Sunday, came on suddenly and without warning.

Brooks has been sidelined before by stomach ulcers, and has now missed games in each of the past three seasons because of stomach problems.

“There is a little bit of history there,” Pederson added. “But it’s something our medical team will do more to investigate this thing as we go.”

Whether or not this is a recurrence of the ulcers for which he was previously hospitalized remains uncertain.

At this point, not even Brooks knows the cause of his stomach pains according to Pederson, who said the two spoke on Monday morning.

“You know, [Brooks] definitely wants to explore the reasons why,” he said of their conversation. “If we can help him, I want to help him and make sure it doesn’t happen again. ”

With the current state of the Eagles offensive line, it’s bad enough not having him active on game day, but it’s made worse by the fact that Brooks is taking the first team reps all week instead of rookie Isaac Seumalo, who has been starting in place of Brooks and could use as many as he can get.