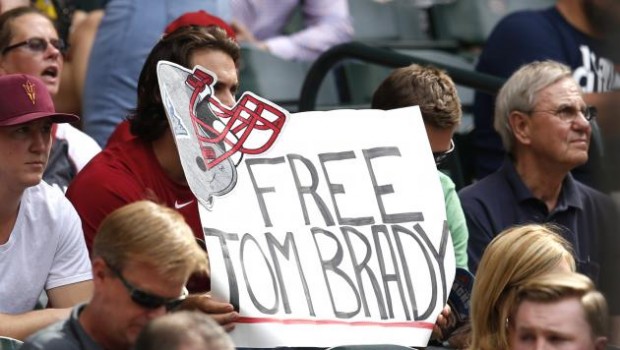 You would think these morons could have spent Memorial Day Sunday rallying to pay homage to veterans.

The “Free Tom Brady” rally was organized on Facebook. Pablo Munez, 22, told the Boston Herald that more than 600 people had committed to attend the rally on the social media website.

Foxborough police sergeant John Chamberlin estimated the number of people that attended the event at 150, the Boston Globe reported.

Many of the fans who gathered on Sunday wore Brady football jerseys with his number 12 on the back and held signs calling on NFL commissioner Roger Goodell to rescind the suspension.

“Money can’t buy legacy, and that’s what’s being tainted right now,” Munoz told the newspaper. “If you take that away from him he could live his whole life with money, but at the end of the day if he goes in the Hall of Fame with an asterisk next to his name, that’s going to be more than defamation. That’s to be just terrible.

“That’s really what this is about. It’s to show him there’s still a nation, a sea of people who believe that he’s the champion that he is. I think it’s going to be great for him. He’s given us so many memories. We just want to give him one.”

The penalty was imposed on the four-time Super Bowl-winning quarterback after investigator Ted Wells found it was more probable than not that Brady was at least generally aware of team employees who schemed to let air out of Patriots’ footballs prior to January’s AFC championship game.

Goodell plans to hear Brady’s appeal of the suspension.