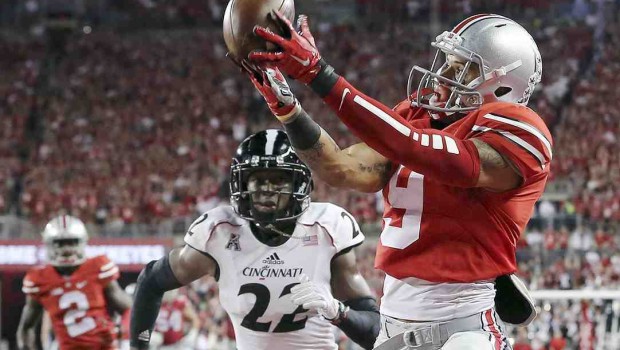 AT WR AND O-LINE, EAGLES HAVE LOTS TO CHOOSE FROM IN DRAFT

The Eagles have been one of the NFL’s most active teams this offseason. From trading star running back LeSean McCoy to Buffalo for linebacker Kiko Alonso, to signing Seahawks cornerback Byron Maxwell to a huge deal and stealing DeMarco Murray from the Cowboys, to swapping quarterback Nick Foles for Sam Bradford with St. Louis, head coach Chip Kelly has continued to be active in revamping the Eagles’ roster on the offensive side of the ball.

There is still one big need to be filled, at outside wide receiver following the departure of Jeremy Maclin to Kansas City, and the Eagles could afford to add depth to their offensive line.

Here is a look at possible prospects at each position the Eagles could target in the draft (assuming Philly opts not to move up to draft Marcus Mariota and sticks with Bradford as its starting QB in 2015).

After releasing DeSean Jackson last offseason and seeing Maclin get plucked by the Chiefs in free agency, the Eagles have a void to fill on the perimeter. Last year’s second-round pick, Jordan Matthews, had a strong rookie season and has a promising future. Riley Cooper has been serviceable as a No. 3 option and second-year player Josh Huff possesses good speed, but the loss of Jackson and now Maclin leaves the need to add a weapon with some speed and run-after-catch ability outside the hashes.

Round 1 (Pick 20) — Ohio State WR Devin Smith (photo above): Alabama’s Amari Cooper, West Virginia’s Kevin White and Louisville’s DeVante Parker are the top three receivers in this draft, and all will likely be off the board by the time the Eagles pick at No. 20. But Smith makes sense here as a good consolation prize. While he is an elite downfield threat and his best fit is with a vertical passing team, he is a more well-rounded receiver than he’s given credit for, and he flashes the ability to ruin pursuit angles when he catches a seam as a runner. Philly may be better suited to wait until the second or third rounds to land a receiver, as this class has good depth at the position, but Smith is an intriguing option at No. 20.

Day 2 — USC WR Nelson Agholor: He isn’t elite in any one area, but is one of the more polished receivers in this class. He has a natural feel for routes and very good spatial awareness out of breaks. While he suffers from some focus drops, he has the ability to create after the catch and his versatility to line up all over the field would be appealing in this offense. Kelly has seen what Agholor can do first-hand, as Agholor torched Oregon’s defense with six catches for 162 yards and a touchdown as a freshman in 2012.

Day 3 — Alabama WR DeAndrew White: He was often overshadowed by Cooper at Bama, has just average size and has dealt with durability issues throughout his career. But he is a sudden athlete who has shown flashes in games. He has good separation skills and possesses the top-end speed to stretch the field vertically and manufacture yards after the catch. If able to stay healthy, White might be a viable option and quality fit in the late-Day 3 range.

After a healthy 2013 season in which all five starters played in every game, left tackle Jason Peters was the only lineman to play in 16 games as the Eagles’ front line last year was plagued by injuries and suspensions (OT Lane Johnson was suspended four games for PEDs). Starting right guard Todd Herremans was waived and signed with Indianapolis. Opposite of Herremans, OG Evan Mathismissed seven games with a torn MCL and is getting long in the tooth entering his 11th season. The need to add depth particularly on the interior is there.

Round 1 (Pick 20) — Florida State C Cameron Erving: Some might feel as though this is early for Erving, or that he isn’t a great fit for Philly because his best position is at center and the Eagles already have one of the league’s best in Jason Kelce. However, Erving is one of the most versatile offensive linemen in the class and has the size (6-foot-5, 314 pounds), agility, intelligence and enough inline power to line up at guard in the Eagles’ zone-blocking scheme. While he isn’t as efficient outside at tackle, he has the length and experience to hold up in a pinch — particularly in Kelly’s system. Erving’s ability to provide flexibility along the offensive line can’t be overstated, especially for a group that struggled to stay healthy last year.

Day 2 — Texas A&M OT Cedric Ogbuehi: There has been a lot of talk linking the Eagles with Oregon tackle Jake Fisher, given his connection with Kelly. And while Fisher would make sense here, another option could be Ogbuehi, who has almost been forgotten about after an up-and-down year and a season-ending torn ACL in 2015. He would be a good fit for Kelly’s system with his foot quickness, agility and excellent length (35 7/8-inch arms), and the zone-blocking scheme would help mask his struggles against power. Ogbuehi started his career at guard for Texas A&M before playing both right and left tackle, so his versatility (like that of Erving) would add value to the Eagles’ line.

Day 3 — McNeese State G Antoine Everett: He lined up at left tackle in college but projects as a guard at the next level. He caught our eyes at the NFLPA Collegiate Bowl in January and displays good overall strength, power and above-average balance in space. Everett could add depth to the interior of the Eagles’ line in the mid-Day 3 range.

Kevin Weidl is a writer for Scouts.com.