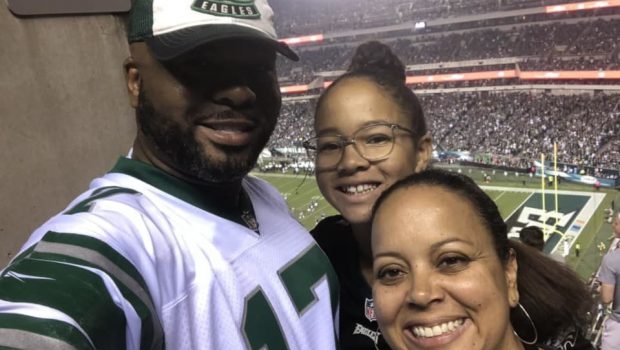 WOW! THIS FAN HAS BEEN TO EVERY 2018 EAGLES GAME, EVEN LONDON!

Even after the Eagles won the Super Bowl for the first time in franchise history last February, the football dream wasn’t complete yet for superfan Koroun Butler.

The 45-year-old, who was born and raised in Philly and now lives in Gilbert, Arizona, was diagnosed with a viral infection in his heart in 2016 that made him take a closer look at his bucket list.

He decided that 2018 was going to be the year he attended every single regular season Philadelphia Eagles game.

“I’m fully recovered, but at the time, and even leading up to that, I was like, man, there’s a lot of stuff I want to do,” Butler told HuffPost. “I turned 45 this year, and the Eagles turned 85 this year, so it just seemed like it made sense to to do it in 2018.”

Butler, who trains automotive salespeople, was able to start saving up hotel points and airline points through all of the travel he does for his job. When the 2018 schedule came out, he would spend hours looking for ways to get tickets, even asking friends with season tickets to spare a few. Eventually, he ended up buying them through Vivid Seats. He booked his flights, hotels and got ready to travel.

Through what Butler called a “labor of love” and “a logistical nightmare,” he made it to all 16 regular season games all over the country, and even one across the pond. The season included a trip to London for the Eagles’ game against the Jacksonville Jaguars at Wembley Stadium: