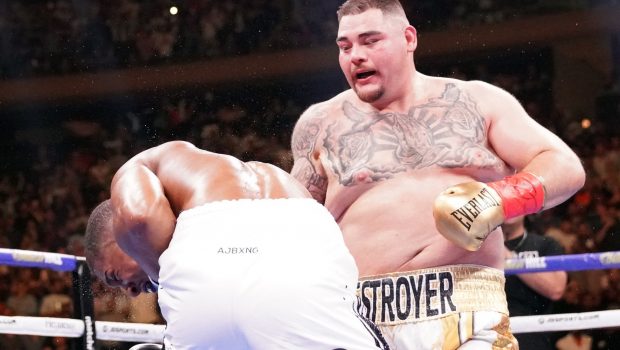 WOW! THE NEW HEAVYWEIGHT CHAMP IS ON A SNICKERS DIET

Anthony Joshua was facing for his first fight on United States soil Andy Ruiz Jr., a Mexican-American fighter with a penchant for eating Snickers before his fights.

Then Joshua hit the canvas. Again. Again. And again.

By the seventh round Saturday night in Madison Square Garden, Ruiz scored a spectacular upset with a technical knockout after the referee stopped the fight. The upset had echoes of Buster Douglas’s shocking knockout of Mike Tyson nearly 30 years ago, and it ruffled the top of the heavyweight division.

“I wanted to prove everybody wrong, all the doubters thinking I was going to lose,” said Ruiz, 29, who became the first fighter of Mexican descent to win the world heavyweight title. “I can’t believe I just made my dreams come true.”

The exhilarating showing at the Garden came at a time of renewed hope for the heavyweight division, and as broadcasters showed new interest in the sport.

There is more boxing on television than there has been in more than 30 years, and broadcasters are putting more money into the sport than ever — $400 million a year, by some estimates. ESPN, Fox and a new streaming service, DAZN, which carried Saturday night’s fight, have all made recent lucrative investments in the sport, joining the longtime boxing broadcaster Showtime. This new activity came as HBO left the boxing business last year.

No one had given Ruiz (33-1) a chance against Joshua, an ascendant megastar in the United Kingdom who had fought in front of crowds of 90,000 fans in his home country. But Ruiz stunned Joshua (22-1) with furious punching flurries that left the British fighter wobbling on many occasions. The largely pro-Joshua crowd had gone from thrilled to stunned by the time the fight was over.

Joshua embraced Ruiz in the ring after the fight, posed with him for a picture and smiled. And at 1:40 a.m. on Sunday, long after the fans had cleared out, after most of the news media had left, Joshua, 29, ambled into the interview room and was somber yet affable.

He wanted to speak to reporters, he said, “to show that we don’t fold, we stand strong at all times. I will address the situation that happened tonight, and then we move forward, onto the next.”

The larger question is what’s next for a heavyweight division that boxing enthusiasts in recent months had been hyping as on the brink of a renaissance after roughly a decade and a half slumber. Boxing has always craved an exciting heavyweight division because, with its high potential for thrilling knockouts, it has the best chance to attract mass appeal.

After Tyson, Lennox Lewis and Evander Holyfield left the sport, the brothers Vitali and Wladimir Klitschko, who fought out of Ukraine, held a grip on the division. Despite their deft talents in the ring, their fighting styles did not have mainstream appeal, and they lacked the types of compelling rivalries that generate broad interest.

The emergence of Joshua, Wilder and Tyson Fury of Britain — three men with skills and captivating personalities, and with drama among them — seemed to present the kind of intrigue and marketability that would attract fans.

Although Ruiz’s upset dampened, for now, some of the hype of Joshua potentially fighting Wilder or Fury, some speculated that it might only add to the allure of the division.

“Any outcome is possible when the top guys fight,” said Evan Rutkowski, a former HBO sports marketing executive and host of Fistianados, a podcast about the business of boxing. “There’s three, maybe four, that could be either elite talents or potentially generational talents. But they all have weaknesses, which is what makes it all very exciting.”

Ruiz may have nudged himself into the conversation of elite heavyweights, and in doing so he gives the Mexican fan base — which is rabid for the sport — a reason to show interest in the division. After the fight, Ruiz, who was born and raised in Imperial, Calif., along the Mexican border, strolled into the news conference wearing a Knicks jersey and a nonstop grin. He spoke with a nonchalant glee.