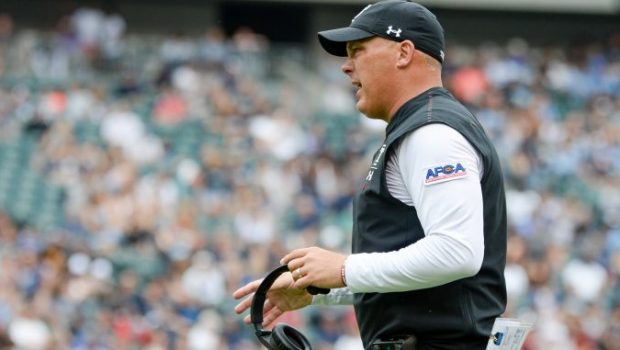 In Geoff Collins’ second season as coach, the expectations for Temple’s football team have been raised after last season’s first bowl game since 2011.

Collins’ Owls finished 6-6 in the 2017-18 regular season after going through rough patches in the first half of the schedule. Still, the Owls defeated Florida International University in the Bad Boy Mowers Gasparilla Bowl, winning handily, 28-3.

The Owls were expected to improve this season and compete with the likes of Central Florida and South Florida for the top spot in the American Athletic Conference’s East Division.

In Saturday’s 19-17 loss to Villanova at Lincoln Financial Field, Temple showed it is still far away from making that jump.

Temple lost to an inferior opponent. Villanova is one of the top Football Championship Subdivision schools, but it came to Philly as 15.5-point underdogs and still left victorious.

The Owls did not take Villanova for granted. They took themselves for granted. Blown opportunities, including a missed 29-yard field goal, throws at the feet of wide receivers, poor clock management and the inability to get the defense off the field, showed that a season where the Owls were presumed to have a higher level of play has quickly turned into one where no win is guaranteed.

Six games remain on the Owls’ schedule against teams that were bowl eligible in 2017. Plus, they have a Week 3 showdown against the University of Maryland on the horizon. Maryland upset nationally ranked University of Texas in its first game of the season on Saturday.

Even Temple’s matchup later this month against Tulsa, which finished 2-10 last season, may not be a foregone conclusion. Certain games on Temple’s schedule could have been viewed as potential wins, but after a loss to an FCS school, the Owls no longer have that luxury:

Temple football not ready to make next jump