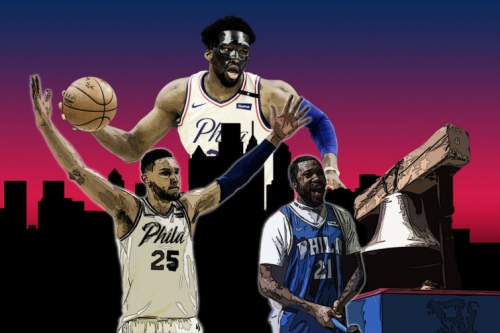 The path to contention is clear. Joel Embiid is frequently injured, in questionable shape, and a malcontent who frequently publicly questions the franchise’s plan for him.

He’s also inefficient against stout defense—we have 115 points on 102 shots in the Celtics series as proof of that—and is a beefy center on a maximum contract in an NBA increasingly focused on shooting and running.

The Sixers lost Embiid’s clear analogue, Andrew Bynum, to free agency in 2013. On the trade market, Embiid should be able to command at least five second-round picks and the rights to a first-round 2024 swap. Anything less than that is an affront to Sam Hinkie’s legacy and would constitute losing the trade, which is absolutely not something that a team entering a rebuild of this magnitude can afford to do.

Even easier to divest should be Ben Simmons. The 21-year-old Australian is a virtual lock for Rookie of the Year, but his limitless limitations were laid bare in the playoffs. The last time a 76er won the ROY award was Michael Carter-Williams in 2014; he was stunningly dealt in 2015 for what’s likely to become the No. 10 pick in the 2018 NBA draft and has pretty much sucked since leaving Philadelphia. Simmons, although he can’t shoot free throws and is an eternal late-game vulnerability, should be worth a top-ten 2021 pick for sure.

There is a small chance that the 2018 Lakers pick conveys to the Boston Celtics as part of the trade the Sixers made to acquire Markelle Fultz, depending on how the lottery goes next week. Fultz is a clear building block on a team with championship contention in mind; his complete inability to play NBA basketball will both be good for his development, and should keep him from running up meaningless miles on his body. His presence also ensures that his team gets a higher pick in future drafts, and thus more chances at landing the sort of generational talent that can anchor a franchise for decades. Embiid may look like a stouter Anthony Davis and Simmons a taller LeBron James, but those guys are already in the league. There is no one else in the NBA like Fultz, and it’s important to zig where everyone else zags.

Solving what’s wrong with the Sixers isn’t a basketball problem so much as it’s about leadership making the bold, difficult decisions that need to be made. A team with Fultz as the 12th-best player is stuck in the second round indefinitely, but a team with Fultz as its second-best player frees itself from a never-ending loop of mediocrity. In the short-term, that promises to be painful. There will be a lot of losing en route to the ultimate goal, and the pursuit will not be for the faint of heart or weak of will. But you filthy rubes, you disgusting morons, you fucking idiotic cowards cannot get hooked on the narcotic of a pleasant-enough regular season and a three-week playoff run. The only way forward is backwards. The results might be ugly for a little bit, but you troglodytes have to trust the process.