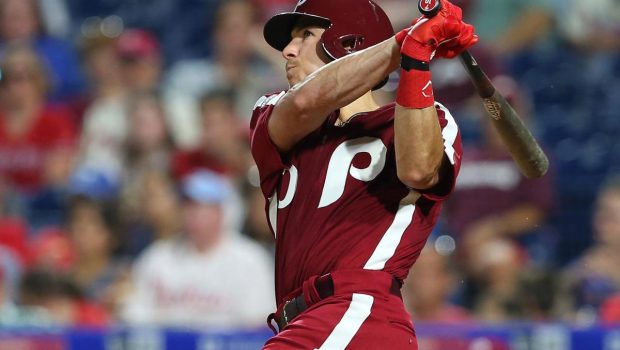 WOW! PHILS WERE AS BAD AS THESE HIDEOUS UNIS

Atlanta left fielder Adam Duvall smacked a home run in a 15-7 win over the Phillies.

Duvall was recalled from Triple-A Gwinnett to replace veteran Nick Markakis, who was placed on the injured list with a fractured wrist. Duvall, who was leading the International League with 29 homers, went 3-for-5 with two runs scored, two RBIs and the home run.

The Braves have won the first two games of the three-game series to expand their National League East lead to six games over the Washington Nationals and 6 1/2 over the Phillies.

The Braves scored four runs in the second inning on a pair of two-run homers. Ender Inciarte hit his third homer and Ronald Acuna Jr. hit his 25th. Acuna extended his career-long on-base streak to 31 consecutive games, the longest active streak in the majors.

Atlanta had 16 hits, with Josh Donaldson going 3-for-6 and Acuna, Inciarte and pitcher Max Fried each getting two hits.

The winning pitcher was Fried (11-4), who was making his first start since being activated from the injured list with a blister on his left index finger. Fried pitched 5 1/3 innings and allowed five runs (four earned) on seven hits and three walks with six strikeouts.

Fried enjoyed a 14-1 lead but was removed after allowing a pair of two-run homers in the sixth, one by J.T. Realmuto, his 13th, and the other by Sean Rodriguez, his third.