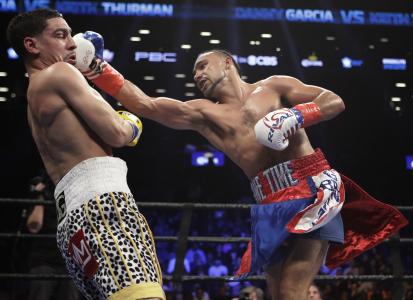 PHILLY GUY GARCIA’S DAD GOES OFF ON THURMAN, WHO BEAT HIS SON!

“[Thurman] ain’t no fucking champion. The WBC was disgusted to give him the belt! … Because he ain’t win, that’s why … I’m disgusted with this shit. [Thurman] lost, my brother. He ran the whole fucking night … for real, for real, I want Danny to retire today…. I had it seven, I’ll give [Thurman] five [rounds]. I’ll give him five rounds if anything – he ain’t fucking win. The WBC was disgusted to give him the fucking belt…. Danny knock him the fuck out, that’s what Danny should have done – knock him the fuck out. ‘Cause [Thurman] was the favorite going in, everybody who favored him was on his motherfucking dick all the way down to his balls! They was sucking his penis from the top of the penis — or a little dick probably. He ain’t from Philly, he ain’t got a big dick. You gotta be from Philly to have a big dick.”