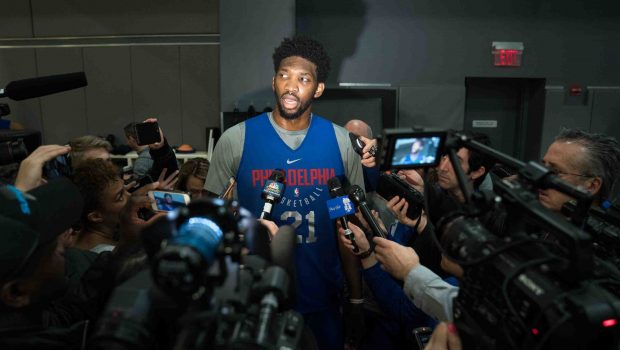 WOW! PHILLY IS FINALLY ON TOP OF AMERICA’S SPORTS PYRAMID!

It was around Thanksgiving when the people in this fatalistic sports city had reasons to feel unusually optimistic about the Eagles and 76ers.

The Eagles were 9-1 and coming off a shellacking of the Cowboys. The Sixers had won five of six games and made the Golden State Warriors break a sweat.

Philadelphians celebrated such a triumphant time the only way they knew how: They fretted that it was all going to end in disaster.

“You have to remember: When you’re a lifelong Philadelphian, it’s years and years of disappointment,” said Jim Kenney, Philly’s mayor.

It turned out they were right to be worried. Carson Wentz had a season-ending injury right before the NFL playoffs last year, and Joel Embiid fractured his orbital bone right before the NBA playoffs in March. Which makes what happened next as unexpected as it was un-Philadelphian.

The Eagles won their first Super Bowl. The Sixers, who were not interested in winning anything until recently, are the favorites to win the Eastern Conference.

All of this is happening in a city that, until February, had only one major sports title in the last three decades. Philadelphia’s teams were so tragic for so long that Matt Yeck, a 38-year-old bar owner and Eagles and Sixers season-ticket holder, took it upon himself to diagnose the city with a clinical psychological syndrome.