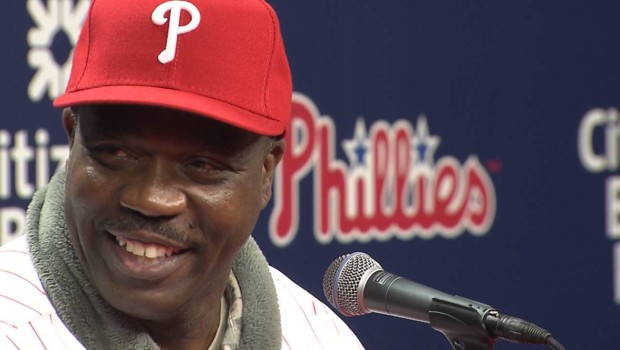 The Phillies held a press conference last Friday that didn’t get a lot of attention.

After all, the local media were all-in on the Eagles’ search for a new coach, and it was hard to get excited (or even attend) a Phillies presser.

It was supposed to be a news conference announcing that right-hander Tommy Greene, who pitched a no-hitter for the franchise in 1991, was retiring as a Phillie.

Army Sgt. 1st Class Jamil Ali had no way of knowing it was an elaborate hoax.

All the soldier — who has served 19 years in the military, including deployments in the Middle East — knew was that he had been offered a tour of Citizens Bank Park on Friday.

When Ali entered the Media Room, sure enough, Greene was at the podium talking about his favorite Phillies memories.

And then the true purpose of Ali’s visit was revealed.

Public affairs director Scott Palmer acknowledged his presence. The next thing Ali knew, the Phillie Phanatic was escorting him to the front of the room as members of the team’s front office, who had been posing as reporters, gave him a standing ovation while waving rally towels and showering him with confetti.

Once Ali arrived, Greene greeted him with a personalized Phillies jersey and the news that he was being given an all-expenses-paid trip to the team’s Phantasy Camp in Clearwater, Fla., beginning Jan. 20, when he’ll get an opportunity to play with Greene and 20 other team legends. Visibly surprised, Ali could only mouth a silent, “Wow.”

Ali, 56, lives in North Philly rooting for bygone stars Dick Allen, Tony Taylor and Jim Bunning. He was stationed in Iraq while the Phillies were winning the World Series in 2008, but he found a way to watch every game and hung his Chase Utleyjersey in the mess hall to advertise his allegiance.

Ali is currently assigned to HHB 108th Field Artillery in Carlisle, Pa. With him Friday were his son, Mike, who is also in the Army, and their fiancées.