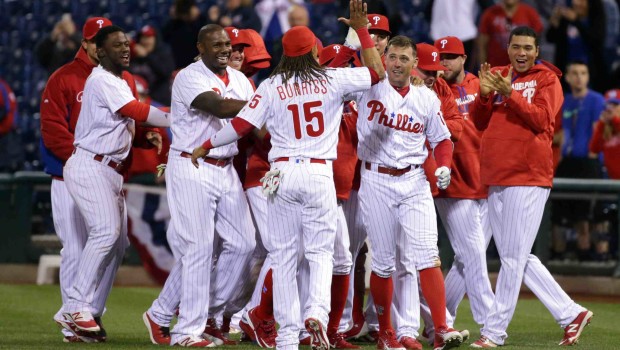 Bourjos smacked a two-run home run to left field in the second inning and finished the night 3-for-4 with three RBIs. He is hitting .526 (10-for-19) with two doubles, one triple, one home run and five RBIs in his last nine games.

There are two ways to look at Phillies’ outfielder Pete Bourjos:

It is refreshing that an outfielder best known for his glove it finding his stroke; and

If Bourjos is your hottest hitter, no wonder the Phils are sinking like a rock!

Manager Pete Mackanin has rested players, shuffled lineups, benched icons and even ordered hitters not to pick up their bats before a game to clear their heads, but nothing has jump-started the Phillies’ offense.

“I’m going to try to get as close to a set lineup as I can instead of the back and forth,” Mackanin said before last night’s 14-10 loss to the Twins at Target Field.

“I’ve been in that position where you play a day, you don’t — it’s tough. I’m going to try to zero in on who I want to play. It might be [Tyler] Goeddel, it might be [Cody] Asche, it might be [Peter] Bourjos, it might be whoever else we have. I don’t want to keep switching all the time. I’d like to keep somebody in there at least five days a week. I’m not there yet.”

He might be leaning toward Bourjos in right field at this point, which might surprise some, considering he was hitting .192 with a .501 OPS in 161 plate appearances through June 11. But Bourjos is the team’s hottest hitter lately, and the Phillies can hardly afford to put their hottest hitter on the bench. Bourjos smacked a two-run home run to left field in the second inning and finished the night 3-for-4 with three RBIs. He is hitting .526 (10-for-19) with two doubles, one triple, one home run and five RBIs in his last nine games.

Asche, who started in left, went 3-for-5 Tuesday to make a case for himself.

Andres Blanco, who went 0-for-5, still should see more playing time as Cesar Hernandez and Freddy Galvis struggle. Maikel Franco went 2-for-5 with a three-run homer in the eighth inning. The Phillies badly need him to get going.

“He looked better,” Mackanin said about Franco. “We worked on it in extra batting practice today. He knows what he has to do. He knows he has to get under control. For the most part, he was.”

“If you would have told me were going to score (10) runs tonight with [Aaron] Nola pitching I would have been thrilled,” Mackanin said. “I would have bet money on it.” 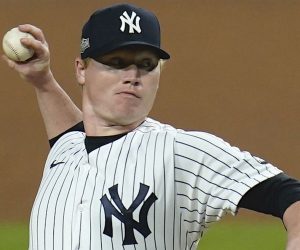 MASTERFUL BULLPEN LIFTS PHILS TO WITHIN 1 1/2 GAMES OF WILD CARD!