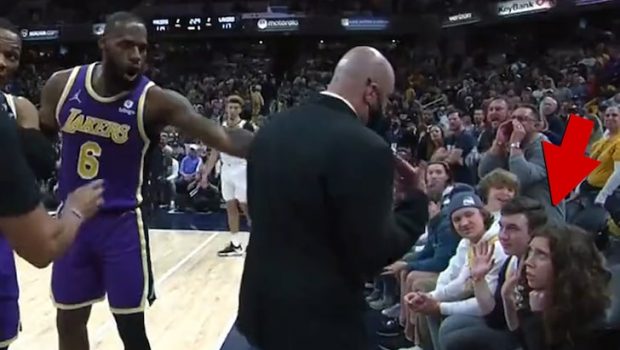 Lebron James scored a season-high 39 points to lead the Los Angeles Lakers to a 124-116 overtime win against the Indiana Pacers.

And he used his power to have a pair of fans ejected from their courtside seats at Gainbridge Fieldhouse in Indianapolis.

With 2:29 left in the extra period, James brought referee Rodney Mott over to the sideline and demonstratively pointed and gestured at two fans. An arena official approached, then another, and after a brief conversation with Mott, the officials escorted a man and a woman from their first-row seats on the floor.

As they left the court, the woman appeared to make a pouting face and crying motion in James’ direction.

After the game, James did not elaborate on what the fans specifically said or did, only describing their actions as “outside the line with obscene gestures and words.”

“When obscene gestures and language come into it, (it) can’t be tolerated,” James said. “There’s a difference from cheering for your team and not wanting the other team to win and things I would never say to a fan and they shouldn’t say to me.”

LeBron unhappy with some fans courtside in Indiana pic.twitter.com/1Ud3B69G1E