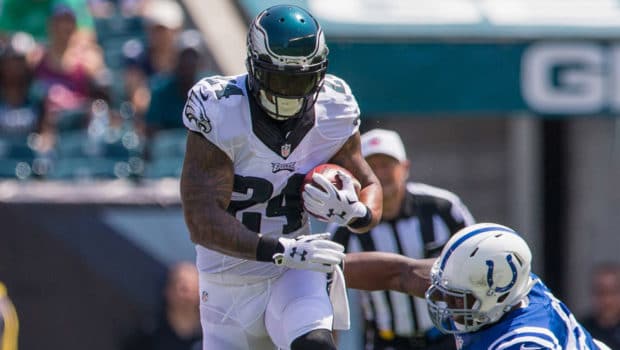 WOW! ESPN SAYS EAGLES HAVE 5TH MOST TALENT IN THE NFL!

The Eagles imploded around Chip Kelly, but the roster still has a lot of good players, and more may see the field after their offseason of personnel moves designed to move away from Kelly’s way of doing things as fast as possible. Cox has been a monster and could improve with a transition to a four-man line in which he will no longer have two-gap responsibilities, allowing him to simply attack gaps and wreak havoc in the backfield. Graham and Vinny Curry are both able edge rushers, and Bennie Logan should be a fine nose tackle in a 4-3 scheme, giving the Eagles a formidable front. Jenkins and Rodney McLeod look on paper to be one of the league’s best safety tandems, and if Eric Rowe can take a step forward, this defense looks very impressive.

There are still a lot of pieces in place on offense. The line has talent, but it has been inconsistent. Skill position players Ryan Mathews (above) Zach Ertz, Darren Sproles and Jordan Matthews provide dangerous weapons from their roles. Second-year receiver Agholor needs to be much better in 2016. Plus there’s the quarterback competition, which will be the headline grabber, but Bradford played pretty well in 2015.

Check out the rankings: