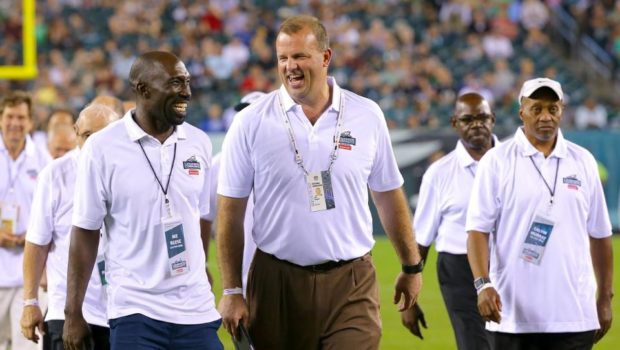 WOW! EAGLES WOULD HAVE BEEN BETTER OFF WITH RETIRED JON RUNYAN AT LT INSTEAD OF LANE JOHNSON!

If there’s one thing the lame-ass Philly media has been drumming into our heads it’s that the Eagles’ offensive line is a strength beyond our wildest dreams.

After all, Lane Johnson is a stud who, when he is not suspended for PED use, is the best player on the team.

He is a right tackle who has been groomed to play left tackle, protecting Carson Wentz’ blind side, especially when All-World LT Jason Peters is away on family leave as he was last night against the Bills.

Well, Johnson sucked at left tackle, and the makeshift O-line did too.

Newbie right guard Chance Warmack was so overwhelmed the Eagles inserted veteran Brandon Brooks, who they didn’t start because he was coming off an ankle injury.

Matt Tobin was steady as he stepped in at right tackle. Center Jason Kelce held his ground.

True, Johnson had to make a radical adjustment. The footwork is entirely different on the left side. Blink and you could be beat.

But Johnson has played left tackle before, and with any number of teammates. He’s better than what he showed, which wasn’t much.

Johnson’s run blocking was adequate, but his pass protection was woeful.

Carson Wentz was sacked by rusher Jerry Hughes. Johnson knew he’d get a rush as the Eagles were in third-and-11. Hughes faked the outside rush, cut inside of Johnson and slammed into Wentz, taking it just easy enough on the quarterback to leave him upright as the play was blown dead.

Left guard Isaac Seuamlo has had better days, too. The Eagles wouldn’t have been much better with Hal Vaitai in the lineup. He was scratched with a sprained knee.

Peters, who was grieving a death, has agreed to move inside to guard if the going gets too tough for his 35-year-old chassis. That would necessitate moving Johnson to left tackle. It would have been interesting to see that combination live.

The good news is it was only a preseason game.

And it’s safe to say that for now the Eagles don’t want to think about a future without Peters.