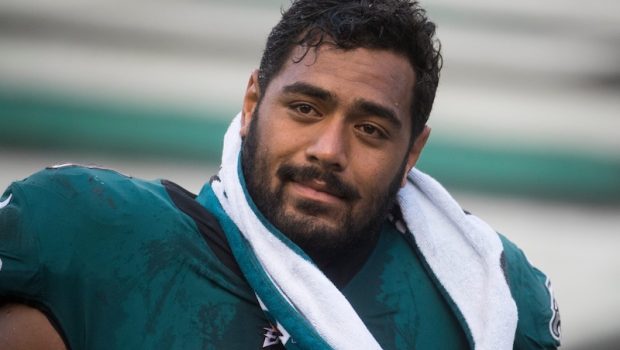 WOW — EAGLES UNTESTED LT MAILATA’S DEAL COULD BE WORTH $80M!

The Eagles announced yesterday that left tackle Jordan Mailata signed a four-year deal that will keep him with the club through the 2025 season.

Per ESPN’s Adam Schefter, the Eagles will pay Mailata at least $64 million with $40.85 million guaranteed. The deal could end up being worth $80 million in total value.

The deal ties Mailata with Taylor Lewan of the Tennessee Titans as the seventh-highest paid left tackle in the NFL by average annual value:

Mailata was drafted by the Eagles in the seventh round in 2018. He was born in Australia and played for the South Sydney Rabbitohs in the National Rugby League.

After declining a one-year, $5,000 contract offer to remain with the Rabbitohs in 2017, Mailata turned his attention to professional football.

Mailata didn’t play in a game during his first two seasons because of back injuries. The 24-year-old appeared in 15 games last year, including 10 starts, after starting left tackle Andre Dillard missed the entire season with a biceps injury.

Sam Monson of Pro Football Focus cited Mailata as Philadelphia’s breakout candidate for the 2021 season on the basis of his play down the stretch last year.

“While there have clearly been some growing pains, he has quietly done a pretty solid job for a guy who is still very much learning the game,” Monson wrote. “Mailata allowed 32 total pressures but was a top-15 tackle by PFF grade from Week 11 onward, just behind Jets first-round rookie Mekhi Becton.”

Even though Dillard is healthy and available to play, Eagles head coach Nick Sirianni announced on Aug. 31 that Mailata would be the starting left tackle this season.

Given Mailata’s age and budding performance, the Eagles are betting on him continuing to play like a top-tier left tackle. It’s not a bad risk for a franchise in the process of rebuilding the offense around Jalen Hurts at quarterback.

At $16M per, Jordan Mailata is now tied with Taylor Lewan as the 7th highest average paid LT in football.https://t.co/RNfH4CCQIH https://t.co/YChLUFmnQe