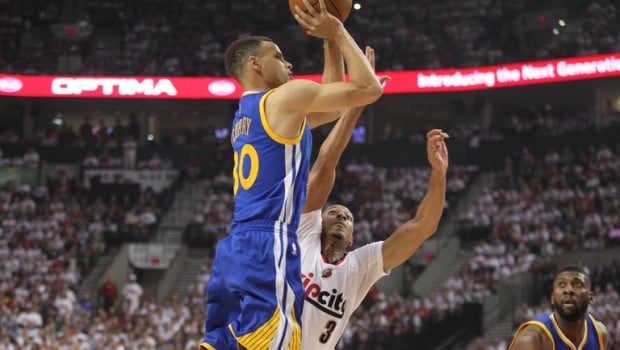 Fifteen days after spraining his right knee in a first-round game against the Houston Rockets, Steph Curry carried the Golden State Warriors to a 132-125 overtime victory that gave them a 3-1 series lead.

“My confidence never wavered,” said Curry, who set another NBA record in a season full of them by scoring 17 points in overtime.

Curry finished with 40 points, 9 rebounds and 8 assists. He shot 6 of 7 from the field in overtime, connecting on all three of his 3-point attempts.

“You miss three weeks, it’s really weird walking back on the court,” said Curry, who had missed two games with a right ankle sprain before spraining his knee. “It took 48 minutes, and things finally clicked.”

If Curry lacked his usual rhythm through three quarters — he missed his first nine 3-point attempts — he was adept at making layups, and he scored the Warriors’ first 12 points of overtime. His fourth 3-pointer of the game gave Golden State a 5-point lead, and a night full of drama here gave way to desperation, then sadness.

The Warriors can close out the series Wednesday night at Oracle Arena.