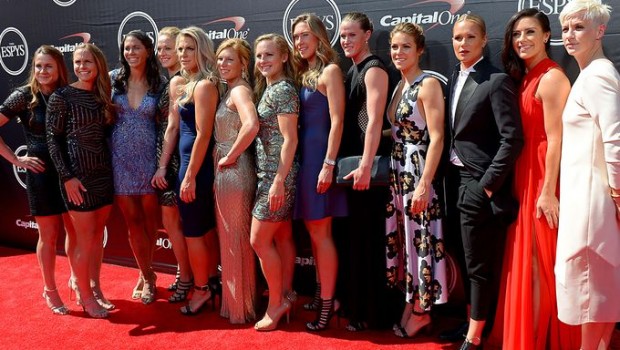 The USA women’s national soccer team continued its World Cup after party Wednesday, taking home the ESPY for Best Team to cap the 23rd annual show that celebrates all things sports and more.

Abby Wambach accepted the award as fellow team members, dressed to the nines, lined the stage beside her, leaving the savvy veteran to make her second meaningful speech of the night.

“You guys believed in us the entire seven games, since four years ago when we fell short to 10 days ago when we won it,” Wambach said in the three-hour show’s last moments. “We lifted the trophy. We did this for American and our fans. You guys are the best. We love you so much.”

One thought on “CARLI LLOYD, WOMEN OF WORLD CUP MAKE IT A BEAUTIFUL NIGHT!”