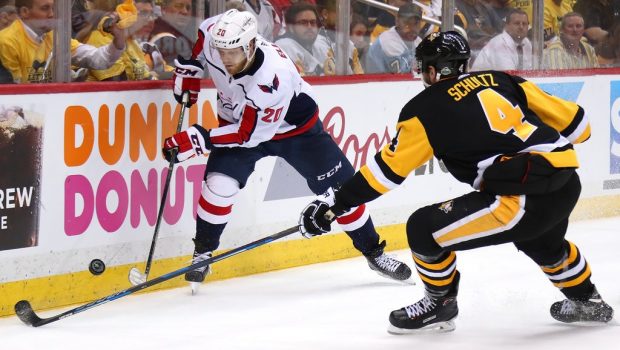 Evgeny Kuznetsov’s breakaway goal in overtime gave the Washington Capitals a 2-1 win over the Pittsburgh Penguins in game 6 and a berth in the Eastern Conference finals for the first time in 20 years.

Kuznetsov took a lead pass from Alex Ovechkin and tucked the puck underneath Matt Murray at 5 minutes 27 seconds, ending Pittsburgh’s two-year reign as Stanley Cup champion and propelling the Capitals into the NHL final four for just the third time in franchise history.

Braden Holtby stopped 21 shots for the Capitals, who will face Tampa Bay in the Eastern Conference finals. Alex Chiasson scored his first playoff goal in four years during a tight contest through regulation.

Kris Letang scored for the Penguins, and Murray finished with 28 saves but couldn’t close his legs fast enough to stop Kuznetsov’s forehand flick from in close as Pittsburgh’s bid at becoming the first team in 35 years to win three consecutive Cups came to an abrupt end.

The Capitals played without center Nicklas Backstrom, who was scratched because of a right hand injury. Forward Tom Wilson sat for a third straight game, serving a suspension for an illegal hit on Pittsburgh’s Zach Aston-Reese in Game 2.

Washington spent the series saying its forgettable playoff history littered with squandered leads and blown opportunities — particularly against the Penguins — was not a factor. That this time was different. That this team was different. Twice the Capitals rallied in the third period to stun Pittsburgh, including a four-goal outburst in Game 5 that pushed them to the brink of the Eastern Conference finals.

That last step, however, has always been tricky. Four times previously during the Ovechkin era, the Capitals won three games in the second round only to come up short in Game 7.

The Penguins, by contrast, had been impossible to finish off since Coach Mike Sullivan took over in December 2015. Pittsburgh came in 4-0 in elimination games under Sullivan, including a 2-0 victory in Game 7 in Washington last spring.

The stakes led to an unusually slow start for both before the Capitals broke through 2:13 into the second when Walker held off Pittsburgh’s Derick Brassard behind the Pittsburgh net and fed Chiasson in the right circle. Chiasson’s shot slipped under Murray’s left arm for his second career playoff goal and first in more than four years, when he played for Dallas.