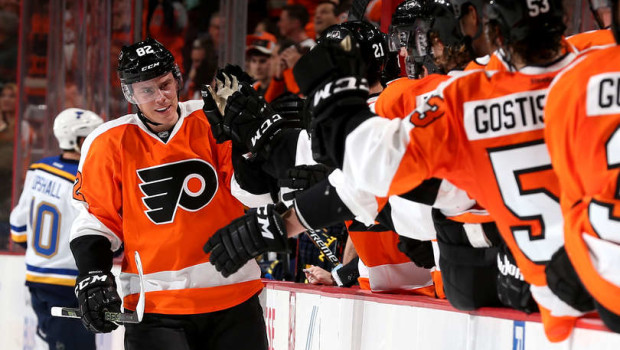 The team that had trouble scoring even one goal, let alone in bunches, came from three goals down last night to win a game!

Evgeny Medvedev scored the game-winner with 3:13 left in the third period, and the Flyers rallied for a 4-3 victory against the St. Louis Blues at the Wells.

Flyers forward Ryan White skated the puck through the slot in the Blues zone and dropped a pass under the stick of St. Louis forward Dmitrij Jaskin back to Medvedev, who one-timed a wrist shot past goalie Jake Allen for his second goal of the season.

Wayne Simmonds scored two goals, and Chris VandeVeldehad a goal and an assist for the Flyers (15-12-7). Goaltender Steve Mason made 26 saves.

It was the first time the Flyers won after trailing a game 3-0 since Dec. 19, 2013, against the Columbus Blue Jackets, when they scored five goals in the third period for a 5-4 victory.

Vladimir Tarasenko’s NHL career-high five-game goal-scoring streak ended, but he had an assist to give him at least a point in six straight. He has five goals and five assists during his streak.

Paajarvi’s breakaway goal gave the Blues a 3-0 lead at 9:11 of the second period, then Claude Giroux was whistled for hooking five seconds later.

During the penalty kill, Pierre-Edouard Bellemare intercepted a pass at the Flyers blue line and broke in alone on Allen, who made a sensational toe save to freeze the puck on the right goal post. VandeVelde reached under a back-checkingAlexander Steen and poked the puck in for his first goal in 26 games.

“The bench was pretty down getting that penalty,” VandeVelde said. “But Pierre made a nice play, I followed it up and put it in. That’s huge for the team.”

Simmonds made it a one-goal game 2:10 later when he finished a 2-on-1 break with Jakub Voracek for his first goal in eight games.

The Blues survived the second period with the lead, but they had little else to show for it.

“We kind of turned it into a track meet a little bit in the second,” Blues coach Ken Hitchcock said. “The shorthanded goal against hurt us a lot, gave them momentum and then the second goal … the third goal’s going to happen. The second goal’s what gave them the breathing room, and then it just turned into somebody was going to score in the third.

The Flyers tied the game 51 seconds into the third period on a power-play goal by Simmonds, who tipped Voracek’s shot past Allen for his ninth of the season.

It was the fourth power-play goal allowed by the Blues in the past 18 games; they had killed off the Flyers’ first power play and 48 of 51 entering the third period.

Medvedev won it with his goal to cap a nice bit of puck-handling by White. After White skated through two Blues players and left the puck for Medvedev, he snapped a shot from the slot through traffic and past Allen.

“I saw him coming out of the net, so I tried to shoot high,” Medvedev said.

Philly is 8-2-2 in its past 12 games and has moved within two points of the Ottawa Senators for the second wild-card spot into the Stanley Cup Playoffs from the Eastern Conference.

The Flyers believe their ability to come back is because of a growing confidence in the systems installed by first-year coach Dave Hakstol.

“There’s this belief that if we stick to it, we won’t always come back, but we’ll give ourselves a chance,” Mason said. “Tonight, we gave ourselves a chance. Stuck around, made it a one-goal game going into the third period. Hard work took over, and guys were rewarded for a strong second half of the game.”

“I think there’s a recognition of things that we’re not doing the right way,” he said. “And those things are addressed on the bench by the players. You don’t automatically flip a switch and change some of those little things. But they’re being addressed by the players on the bench. Most importantly, there’s an effort the next shift to go out and do things the right way. And that’s probably the biggest thing that I sense. Guys know the way we want to play and they go out and they do that together.”