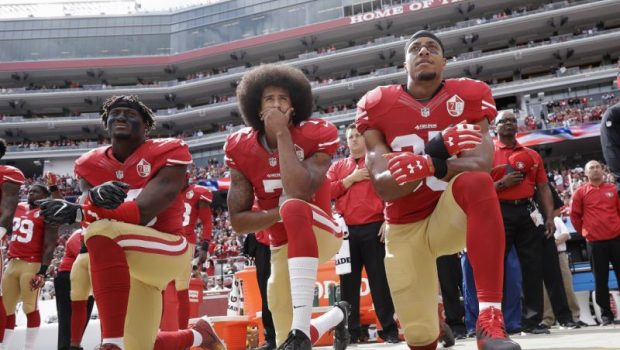 WOULD EAGLES TAKE A CHANCE AND SIGN BLACKBALLED QB KAEP?

Eagles coach Doug Pederson is well-schooled in batting away questions he doesn’t to answer.

Such as whether the Birds would consider adding quarterback Colin Kaepernick.

There has been some speculation regarding Kaepernick’s prospects in the league now that the NFL has relented on their efforts to blackball him.

Pederson discussed the possibility of adding him to the Eagles during an appearance yesterday on 94WIP:

“I think it’s something that if a team or even us were in a situation, we would look at all possibilities and scenarios,” Pederson said of Kaepernick. “The one thing you have to keep in mind is he hasn’t played in a couple years. That still doesn’t mean he couldn’t come in and be a backup and learn your system and do those things for you. It’s not out of the realm or possibility that could happen.”

As Pederson said to the media on Zoom call on Tuesday, he has no issue with Kaepernick, or any other player, taking a political stance:

“I support players who demonstrate peacefully and stand for something.”

Kaepernick has not played since 2016 when he became the first NFL player to kneel during the national anthem as a way to protest police brutality and racism. Of course, his actions were met with criticism and it ultimately played a part in his hiatus from football.

Now that the NFL has switched its stance and openly supports players using their platforms to speak out against racial injustice, the conversation has moved back to getting Kaepernick back into the league.

The Eagles made headlines with their decision to to pair Carson Wentz with Jalen Hurts under center after taking the latter in the second round of the 2020 NFL Draft this offseason. Bringing in Kaepernick would certainly give Pederson a number of options to work with in the event that the team is forced to rely on its backups once again.