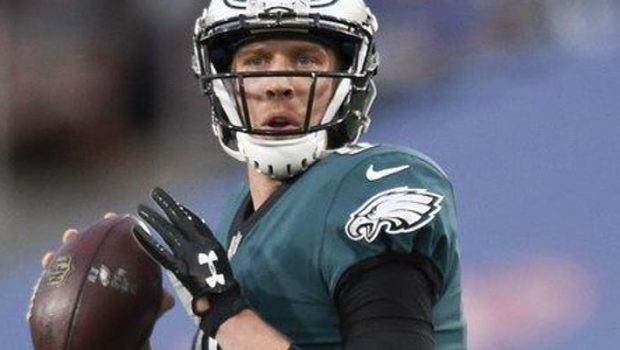 Nick Foles and the Eagles will soon be parting ways.

The Eagles used their team option on Foles, but he decided to buy them out, probably making him a free agent.

The Eagles still have the option to use a franchise or transition tag on Foles by March 5. That’d secure them rights to Foles through the 2019 season, but that would only make sense if the Eagles have already lined up a trade involving the quarterback.

Either way, his days playing in Philly are over, marking the the end of an era. Foles delivered the Eagles their first Super Bowl championship in 2017 and helped get them to the Divisional Round of the playoffs this past season. Now the 30-year-old will get (another) chance to continue to build his legacy as a starter on another team.

That team might be the NFC East rival Washington Redskins.

After the team signed Alex Smith to a contract that’s pretty much impossible to get out of (look at that dead cap!), he suffered a gruesome leg injury that might cause him to miss the 2019 season.

Unless Jay Gruden wants to completely tank the 2019 season, he’ll likely need a quarterback who can immediately play this season.

Washington has about $20 million in cap space, so it might have just enough cash to make a run for Nick Foles.

Case Keenum signed a deal worth $18 million per year in 2018, and Sam Bradford signed one worth an average of $20 million. Neither contract worked out well, but it’s hard to imagine Foles gets any less.

Punting on the 2019 season instead of paying up for Foles might not be the worst idea for Washington, though. This is a team that could use some top-tier talent in the 2020 NFL Draft while it tries to buoy an uncertain quarterback situation.

It’s also a sticking point that Washington is in the NFC East. That wouldn’t matter much if Foles becomes a free agent, but the Eagles would reportedly prefer to tag and trade the quarterback so he doesn’t wind up with a division rival.