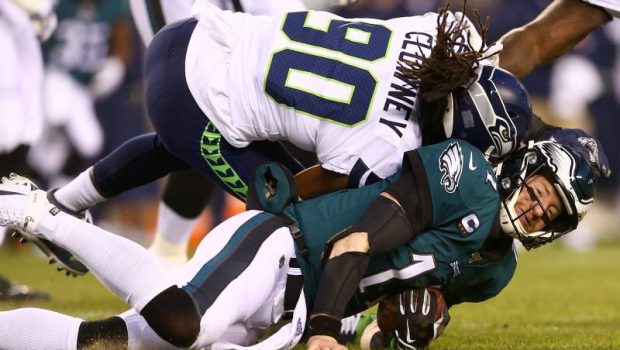 WOULD EAGLES BITE ON FREE AGENT CLOWNEY AT $9 MILLION PER?

Free-agent defensive end Jadeveon Clowney is still available, and the Eagles may be able to pick him up at a cut-rate.

The 6-5, 266-pound Clowney had an asking price of $22 million, which teams are deeming as too steep. He dropped the price down to $17 million a season.

One of the question marks surrounding Clowney is his health, as he has missed 20 games in his career, and is coming off a sports hernia surgery.

“He’s going to be interested in Philadelphia because one of the things and one of the reasons he turned down Cleveland is because he wants to go to a winning team,” Clayton explained.

“He turned down Miami twice because he didn’t expect them to be a winning team.”

Clayton mentioned that Clowney might take a deal in the $9-10 million range to play, with the thought that he will get his money on the free-agent market next season.

He also said if he was to sign with a team like the Eagles and then left in free agency, the team would likely receive a third-round compensatory pick, something Howie Roseman could find attractive:

“I think if it’s a low price they might do it, but right now probably no,” Clayton said.

The Seattle Seahawks insisted on putting the franchise tag on Clowney which allowed him to test the free-agent market this offseason. The team, however, offered him $13-16 million a season in which the player didn’t even attempt to counter.

The former 2014 top pick tallied 21 solo tackles, 3 sacks, and 4 forced fumbles in the 2019 season. With many teams adding firepower on offense, it will be interesting to see which team will snag Clowney to beef up their defensive line heading into the new season.