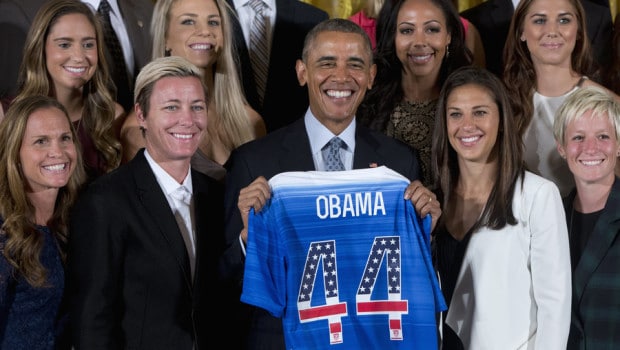 “And Carli’s performance was so good that by the time the game was over, someone had changed her title on Wikipedia from ‘midfielder’ to ‘president of the United States.’ Which, by the way, the job is about to open up,” Obama said of south Jersey’s Carli Lloyd (above on president’s left). “I guarantee you Carli knows more about being president than some of the folks who are running. But that’s a whole other — that’s a whole other topic of conversation.”

The American women who lifted our spirits during a dispiriting last summer and brought home the gold to America got a White House moment yesterday.

“This team taught all of America’s children that ‘playing like a girl’ means you’re a badass,” he said.

The U.S. team beat Japan to win the 2015 FIFA World Cup in July, shattering TV ratings for soccer in U.S. the process. Since the victory, players have been on a victory tour that includes talk show appearances, interviews and exhibition games.

During the team’s visit to the White House, Obama spoke for about 11 minutes about the team’s accomplishments and the contributions of individual players, including midfielder Carli Lloyd, who scored a hat trick in the World Cup final.

Obama’s remarks were mostly lighthearted — he teased striker Sydney Leroux about her Chihuahua, which has 10,000 Twitter followers, and mentioned that a farmer in California had built a corn maze in the shape of Megan Rapinoe’s face — but he also struck a reflective tone about what the World Cup victory symbolized beyond the world of soccer, highlighting veteran Abby Wambach’s “fairytale” ending to her final World Cup appearance.

“I’m not sure [Abby] could have written a better ending: a world champion at last, draped in the Stars and Stripes, showing us all how far we’ve come -– on and off the field –- by sharing a celebratory kiss with her wife.”