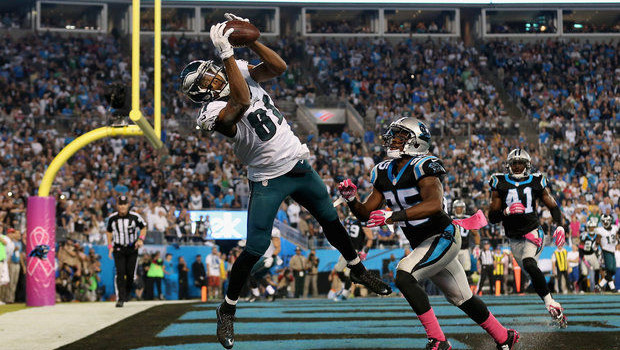 Look at the drops (16 this season, second most in the league). Look at the shocking second-year regression from Jordan Matthews (above — 1 TD in seven games).

This past Sunday night — when the Eagles scored just 16 points and averaged 4.31 yards per play against the Panthers — showed us how little it is getting from their wide receivers.

And remember: Eagles coach Chip Kelly let Jeremy Maclin walk this offseason. The receiver took more money in Kansas City, and his replacement, first-round pick Nelson Agholor out of USC, has been a ghost. In five games, the rookie has only eight receptions (on 17 targets) for 105 yards and he hasn’t reached the end zone. That’s not going to cut it.

Ironically, the position with the most stability is the one that had everyone all up in arms this offseason. LeSean McCoy is a good running back, an electric talent at times, but DeMarco Murray, Ryan Mathews and Darren Sproles can carry the rock in this system when they have the big boys up front putting in work.

And while the Eagles’ offensive line has graded out as the No. 1 unit in terms of pass-protection rate, its up-and-down performance in the run game hasn’t helped take the pressure off Bradford and an overwhelmed WR corps.

If you still want to blame the Eagles’ backward slide this season on Kelly’s playbook, then go ahead. Join the crowd. That’s the narrative, right? But it’s really about the lack of execution on offense within the system. You better have the guys to run that offense. And right now, I’m not sure Chip does.